A Guatemalan farmer has been charged with manslaughter after he set out to personally investigate a burglary that occurred at his home in Santa Rosa Village, Stann Creek District. 27-year-old, Manuel Bo reportedly returned home on March 5 and found that his home was broken into. Having a suspicion as to who the culprit was, Bo began following shoe tracks behind his home which led to a man, known to him as ‘Rabbit’. Bo approached Rabbit and an argument ensued. Rabbit, who has since been identified as 37-year-old, Jeremiah Ack, sustained fatal chop wounds to the head and body. Love News understands that Bo had called the Police to report the burglary and had led them to Ack’s body. Stann Creek Correspondent Harry Arzu spoke to Ack’s family. Senior Reporter Hipolito Novelo has the story.

Hipolito Novelo, Love News: Her father, 37 year old Jeremiah Ack, seen here with his wife, Vendetta Garcia, was brutally chopped to death on Saturday night. The man who did it has confessed. He is 27 year old Manuel Boh, a Guatemalan farmer, also from Santa Rosa village in Stann Creek, charged with manslaughter. Boh told investigators that Ack burglarised his house

ASP. Fitzroy Yearwood, Public Relations, Belize Police Dept.: He reported to police that while he was doing his own investigation into the burglary at his house, he approached Ack where an argument ensued between both men and he caused the injuries to Mr. Ack. He has since been charged for manslaughter. We are certain that the consultation occurred between investigators and the DPP’s office so that’s the directive to charge for manslaughter instead of murder.

Reporter: Ack, nicknamed ‘rabbit,’ reportedly broke into Boh’s house through the window and reportedly stole items. Boh tracked down Ack, a heated argument followed and Ack was left on the ground bleeding to death.

Reporter: And according to the Village Chairman Romaldo Oh, Ack was a career burglar. 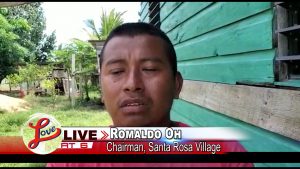 Romaldo Oh, Chairman Santa Rosa Village: Time and time again, I would do get some complaints about this individual here doing petty things in the village.

Romaldo Oh, Chairman Santa Rosa Village: Like you know, he would steal something like people’s livestock. Somethings like that have been happening and he has been well known to the police. People made reports as well and the police are fully aware of who is this individual and that he is known within the community at the same time. Unfortunately, this would have to take place now.

Reporter: But now the Ack family is left without the patriarch. Ack was the primary provider, especially since his wife was unable due to her diabetic condition.

Vendetta Garcia, Wife of Deceased: Both of my hands are sick and they cut off me.

Reporter: and your legs? 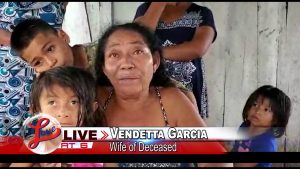 Reporter: Why is that? You were suffering from some kind of sickness?

Vendetta Garcia, Wife of Deceased Because I caught sugar when I *inaudible.*

Daughter: Me myself, I don’t have a husband and I have my four kids and I can’t work either and we’ve also been struggling for all of this time but now, my father has passed away. We don’t have him so we’re left by ourselves now.