And, while the UDP is connecting the dots with PM John Briceno and Diani Chan, the Executive Director of the Southern Environmental Association (SEA) is trying to remove himself from the issues related to the erosion occurring at Silk Cayes. In a press release issued today the Director, Dr. Carlos Itza basically stated that he had no idea the residents of Placencia did not receive permission to build a break wall on South Silk Caye. Last month, Itza issued a letter advising the public that beach erosion mitigation work would be conducted at South Silk Caye by members from the buffer communities near the reserve. SEA says it was under the impression that Government’s permission had been obtained prior to its release being issued. SEA says that Itza’s intention was not to create the impression that he as Executive Director of SEA was giving approval for any such activity. The release goes on to say that “the Board of Directors of SEA has found that the Executive Director erred in not gathering the relevant information before issuing that letter to the public. The Ministry of Blue Economy also issued a press release this evening on what they say was unauthorized developments within the Gladden Spit and Silk Cayes Marine Reserve. The Ministry says that despite efforts by the Fisheries Department Enforcement Officers and the Coast Guard to stop the process from continuing without proper authorization, the organizers refused to cease the work and continued regardless of these enforcement cautions and interventions. Area Representative for Stann Creek West, Rodwell Ferguson also weighed in on the matter and says he fully supports the effort of his constituents. 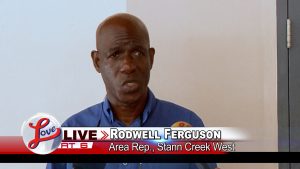 Hon.Rodwell Ferguson, Minister of Youth & Sports: “Silk Caye is more in the Toledo distinct but utilised by residents of Placencia, especially the tour operators and so they realise that the Silk Caye has been deteriorating over the years and they want to put a conscious effort to rebuild it back. But, there are rules and regulations in this country and the authorities had to be involved and so when I heard about it, I was very sick over the weekend so I couldn’t even respond to them and they decided to go and take it upon their own to go and do what they need to do. I spoke to them, to the Minister Responsible for the Blue Economy, yesterday, and I said, “Minister you need to address this situation as quickly as possible and there must be a collaboration between yourself and those who want to participate.” And so he will go down to Placencia between now and Friday to meet with everybody and figure what is the best way forward. What he was saying was there was no objection but they were using wrong material to refill and you know, it’s a catchment area and an area where I think the turtles they rest. They roost. And so, I am in full support of the local people. I’m asking the Minister to please go down as quickly as possible and resolve this matter and then we have a collaboration between the ministry and the people of that area. So it should be resolved by Friday.”

The Fisheries Department says it emphatically expresses its concern over the activities that transpired and is working with its co-managers to address these threats in a manner that is strategic and environmentally safe. 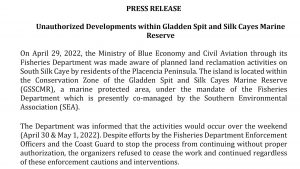