Twenty-year-old Seine Bight Village resident Francis Martinez, a maintenance worker, says he was brutalized by police officers. Martinez was socializing with some friends at Me and You Restaurant when they decided to leave. Martinez returned after scheduling plans with one of the women workers at the restaurant. He says he was then accused of trying to burglarize the restaurant. Here is how he recounts the event. 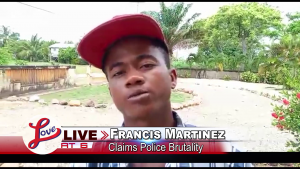 Francis Martin, Claims Police Brutality: “I was just sitting there with my bralee, he ordered food and the girl I brought her a LandShark beer and she said to come back later on. And later on she opened up the gate for me and I came in. I told her I would wait a little and I went to the restroom.”

Harry Arzu, Stann Creek Correspondent: Where is this location she opened door for you ?

Harry Arzu, Stann Creek Correspondent: What place? What’s the name of the place ?

Francis Martin, Claims Police Brutality: “Me & U Shop. She said to come back later and she opened the gate. I came in and I just went to the restroom. Then a guy came out from the other gate from his room to the bathroom.”

Harry Arzu, Stann Creek Correspondent: He pointed a gun at you ?

Harry Arzu, Stann Creek Correspondent: What did the owner do ?

Francis Martin, Claims Police Brutality: “The owner pointed a big shot gun at me too, a pump 12.”

Harry Arzu, Stann Creek Correspondent: Where did the shooting happen ? What shooting ?

Paula Martinez, Sister of Francis Martinez: “The shooting that happened in Seine Bight the said Friday. So now I am going to the station I am wondering now what really my little brother was there for ? They had no valid reason as to why they held him. So now I met the said officer that beat up my little brother the night and asked him what was the reason my little brother was here and if there was a possibility that he would get bail. He told me later on tomorrow, because that was the Saturday night, he said tomorrow we will charge your brother for trespassing.”