Seine Bight resident Kieron Augustine says he is tired and frustrated of being constantly targeted by police officers. Over the weekend, a video of Augustine being place in a chokehold by a police officer went viral, sparking public outrage. Stann Creek Correspondent Harry Arzu spoke to Augustine about the incident.

Harry Arzu, Stann Creek Correspondent: Kieran Augustine a resident of Seine Bight Village told Love News that he was chokehold by a police officer while he was waiting for food at a nearby establishment in the side village over the weekend.

Kieran Augustine, Victim: “I just feel frustrated. I don’t really know what to say because this is something that has been happening for a long time.  Well the police are just constantly harassing me for what I don’t know. sometimes they just see me and ask me for guns, I don’t have any firearms, I’m not killing anybody, I’m not robbing anybody, I’m not selling any kind of drugs or anything like that so I don’t know what the harassment is about but I believe it’s the same situation back in January where I videoed some of the officers using certain force to detain a minor where one of the officers hit my phone out of my hand and I tried to do something about it but one of the officers told me that they can’t do anything about it so I had to go to Placencia but I didn’t did go due to how they detained me the same night because of the video and they charged me for loitering and resisting arrest.”

Harry Arzu, Stann Creek Correspondent: So tell us what happened on Friday night and over the weekend.

Kieran Augustine, Victim: “Well we were just waiting for food from a lady’s establishment close by and the officer came and told us that we were loitering. So we were literally moving because my brother told them if we are loitering then everybody else is loitering so he said for us to go. I told him I’m going across the street because I didn’t get my food yet and he was walking to go home. At the same time the police mobile drived up towards him and they pushed open their door and hit him with the door and I turned back and I went there and I talked to them and told them what’s going on? What is happening? And the officer they just started cussing us and one of them just came and grabbed me from my neck and tried to drag me to put me in the mobile. And I was telling the man that you don’t need to choke me you can hold me if you want me just let go my neck. And he was still holding me it burst my chain from my neck I didn’t even find any of my things at all, tore up my clothes. It’s just something constantly that’s happening and I don’t know what else to do because I went to the police branch in Belmopan.”

Harry Arzu, Stann Creek Correspondent: You made a complaint?

Harry Arzu, Stann Creek Correspondent: the incident which caused a commotion among the spectators nearby was captured on camera and went viral. He added that police continued to harass him for no apparent reason even though he is known by police.

Kieran Augustine, Victim:  “If you want to detain me tell me where what you are going to take me for and I will go with you willingly.”

Harry Arzu, Stann Creek Correspondent: And there was a commotion with the people ?

Harry Arzu, Stann Creek Correspondent: So did the police charge you on Friday night?

Harry Arzu, Stann Creek Correspondent: Did they take you to the station?

Harry Arzu, Stann Creek Correspondent: So what was the commotion about then?

Kieran Augustine, Victim:  “I really don’t know because if they had a charge or something for them to charge me for they know where I live they would go for me to my house so I think they just wanted to be just wanted to be aggressive for the moment or whatnot.”

This morning Police Commissioner Chester Williams was asked about the incident. According to Williams, in this occasion, the police officer was in the right.

Chester Williams, Commissioner of Police: “It’s appalling for the most part to see sometimes how the media would run with negativity when it involves police officers. I watched the video as you showed me a few minutes ago for the first time and from what I saw the police was not really choking the person, the police was holding the person in a certain position. If you can look at the person, the person was still for the most part resisting and was still moving his entire body which means that the manner in which he was being held by the police did not fully restrain him so it is not perse a tight chokehold as one may want to say. And I look at the behavior of the persons around how they were behaving toward the police and trying to remove the person that the police seemingly was trying to detain and then these are things that the public needs to be aware of. The police officers are out there to perform their duties and when you come so close to the police as I saw in that video it is tantamount to obstruction and again this is the only country in the world where people get so close to the police and nothing happens to them. And it is something that we need to change.” 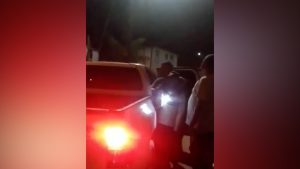