A Stann Creek resident is lucky to be alive tonight after being shot at close range over the weekend. Twenty-seven-year-old Frank Garcia was shot while in front of an establishment in Seine Bight Village on Saturday morning. According to police, Garcia was making his way to his car when he was targeted by a lone gunman. He was shot in the chest and rushed to the Southern Regional Hospital where he remains in a stable condition. Stann Creek Correspondent Harry Arzu spoke to one of Garcia’s relatives, who wished to remain anonymous.

From the moment he got shot, I knew he was not sure what would be the outcome. He told them who shot him that he saw the guy and everybody there saw the guy. Then he was telling us the police mobile was right across the street so we were baffled to find out, welI was baffled maybe to him. But, I was baffled to find out that the guy got away and the police mobile was right across the street. Even one of the police said that they saw the guy standing like almost over him and I’m like, you saw that and you just stood there? And he said that when the guy stood over him with the gun, the gun jammed. The gun snapped. I think it snapped twice and so that’s when police shot in the air and then he ran away. I think one pursued him but lost him on the beach.”

Our newsroom asked Police Press Officer ASP Fitzroy Yearwood about Garcia’s claim that officers’ response to the shooting was sluggish. Here is how he responded. 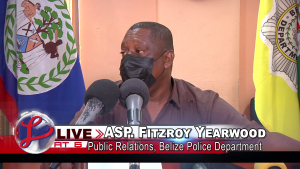 ASP. Fitzroy Yearwood, Public Relations, Belize Police Department: “A lot of people allege a lot of things and when you come under attack by gunfire, for you to be able to look across the street as opposing to try to identify your attacker, it’s neither here nor there. We, at the police department, are making our best efforts in trying to establish who was his attacker and bring this person to justice. The allegation against the police, if they were out there, we will definitely investigate that also and we will know, by our findings, what to do with these offices if they were negligent in conducting their duty.”

Our newsroom understands that Garcia was the suspect in a shooting incident that occurred in the village earlier this year. Residents of the village now fear that this latest incident will result in a flare up between rival groups.