The Cannabis and Industrial Hemp Control and Licensing Bill, also known as the Marijuana Bill, was passed by the Senate on Wednesday. The bill seeks to establish procedures for the control and licensing of cannabis and industrial hemp. It establishes the necessary legislative framework to govern and regulate the cultivation, processing, distribution, and delivery of cannabis products for adult use only. Several amendments were made to the original bill, and during the reading of the bill, Senator for Government Business, Eamon Courtenay outlined what the bill provides for. 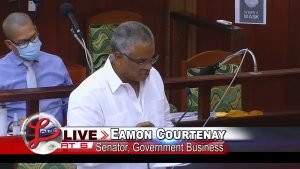 Eamon Courtenay, Senator, Government Business: “Clause 5 is an important provision. Every person who desires to possess cannabis for personal use shall apply to the commission for a Cannabis Program Identification Card. Right now, cannabis can be kept for personal use. There’s no law requiring an identification card and the intention here is to regulate even possession of cannabis for personal use. Clause 5-2: An application for a Cannabis ID Card, the person must be at least 21 years of age. That is to ensure that there are, as best as possible, when it’s regulated, it doesn’t get in the hands of children. Obviously it’s no guarantee but it’s an attempt by the law to say that it is 21 years and older who will lawfully be allowed to possess cannabis and it sets out, Madam President, the other prescribed documents that must be presented and the fee for that ID card. Similarly, Madam President, Clause 6 sets out that for the commercial growing of cannabis plants, an application has to be made to the commission for a licence. What is important, Madam President and members of the Senate, is Clause 3 which sets out that the commission shall grant a licence if the applicant is 21 years and older, at least 30% of the shareholders are the citizens of Belize. So it is important that there be Belizean participation in this new growth industry. It goes on to provide, Madam President, that the applicant, to the satisfaction of the commission, provides the information supplied in Subsection 2. It sets out all the things that must be set out and after conducting a background and interpol check, the applicant and all the interested parties do not have a criminal record. So, Madam President, it is ensuring, hopefully, that only fit and proper persons can be involved in this industry. Subclause 4: A person issued a cultivation licence shall be allowed to purchase cannabis only from the central nursery. The intention there, Madam President, is that there’ll be a central nursery that will be propagating these cannabis plants and seeds for purchase so that there will be control and regulating. There’s a social equity licence that allows persons to get permission and a licence from the commission if they are going to grow cannabis of 4,000 sq ft or less and again the conditions are set out for the grant of such a licence and for the persons who would qualify for such a licence. Subclause 8: Every person who desires to store, market and otherwise sell cannabis, shall apply in writing to the commission for a dispensary licence. That requires a detailed business plan and it sets out in full, all the criteria that must be complied with. There are 9 criteria that must be complied with as a part of the business plan to be put before the commission. There is, of course, Madam President, the delivery licence. Every person who desires to deliver cannabis for any licence holder under this act shall apply in writing to the commission for a delivery licence. So if you have a licence holder who is growing cannabis and you want to deliver cannabis for them ,say to somewhere where there’s smoking or to an individual, you have to apply for a delivery licence.  Again, set out in extenso, Madam President, is a business plan and all the details are set out for a person who wishes to apply for a delivery licence. Again, one must satisfy a background on interpol, have a business plan, must be Belizean involvement in the business. A processing licence: Every person who desires to process cannabis for cannabis edibles, cannabis extracts, cannabis oils or any other prescribed purpose shall apply in writing to the commission for a processing licence and again, it is set out the details that need to be complied with. Clause 11: Every holder of a restaurant licence who desires to sell cannabis and infuse cannabis food and drinks for consumption in a consumption lounge shall apply in writing for a Restaurant Consumption Lounge License. Madam President, again the details are set out in extenso, for that licence. The final point I wanted to bring to the attention of the Honourable Senate is Clause 15 which provides that the commission shall impose as a condition of every licence issued under this part, that the licenced activity shall not take place within a mile of an educational institution or a residential area. That was introduced after consultation, Madam President, seeking to try to keep these types of activity away from persons under 21.”

Unsurprising to the Senate and the public, Senator for the Churches, Bishop Alvin Benguche rose to reject the bill. He told fellow Senators that legalizing marijuana should not be the direction the country should be heading at this time. His objection and rejection was followed by the question as to who will enforce the laws.

Bishop Alvin Benguche, Senator: “The Government, Madam President, is asking the entire Senate, at this time, when we are in the holy season of Lent, and we will soon be celebrating Holy Week to not only debate this bill but actually to pass this bill. I want to directly affect this bill, or address this bill and to say that perhaps no matter how many consultations are held, in so far as the church is concerned, this is not the direction we should be going at this time. We were concerned, for example, about the age limit and it has been moved to 21, but Madam President, one of the things I realise, in my country, you can put an age limit there, 21, but we need to ask ourselves, who will do the policing? And that is a very essential question in so far as this new growth industry is concerned. Who will do the policing? I recall, and I recognise and still realise that there are some mothers and fathers and cousins and uncles in this country who still send the 10 and 12 year old to buy rum, ‘Bad Man’. Is that what you call it? Bad Man? That’s it? Bad Man? I’m learning, Senate, I’m learning. And to buy cigarettes, to go and buy cigarettes and the shopkeeper, without any regard, gives them what they want and they go back and they deliver. I was surprised that I was looking at some videos sent to me in preparation and I see this little boy drinking his Bad Man and his uncle encouraging him, drink up boy, drink up. “Who will police what is before us?” are some of the questions that we need to ask and as I appeal to reason, Madam President, when we talk about this being a cash only industry, interesting, a cash only industry. Why? And we know why. We know why and the business people know why. The representative is sitting right here. They know that we cannot, we ought not, and we should not be dealing with that kind of money within the banking sector. We know that and how it will affect us adversely as a country if we do so. Madam President, I look at the restaurant licensing and there’s a section there that says, if and when the restaurant receives its licence, you can infuse cannabis in food and drinks. That is what is here, it’s right here and one might say but that’s already happening Bishop, what’s going on with it you?  Does that surprise you? But we’re going further, Madam President, in that it will now be legalised, in a sense promoted by the Government.”

Expressing support for the Cannabis and Industrial Hemp Control and Licensing Bill was the Opposition, United Democratic Party. In voicing her approval, UDP Senator Sheena Pitts directly responded to some of the concerns expressed by Senator Benguche. 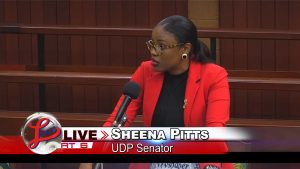 Sheena Pitts, UDP Senator: “When it comes to me and my personal position, I have to say that I find no difficulty with it and I like that Senator Courtenay indicated that he will stay the bill and allow for another month’s consultation to receive representation and the thing is that it’s so unfortunate about having heard that and then hearing Senator Benguche say that ultimately the church is against it, I think that that betrays the good faith indication and gesture from the Government to give another opportunity to hear consultations because Senator Courtenay rightly said, this has been going for some time. It received wide, well some will question how wide is wide, but I will, for my satisfaction I could rest and say it received wide consultation and it has been out there for some time. Section 5-4 goes on to show that a person issued a Cannabis Program Identification Card shall: 4-A be allowed to purchase cannabis only from the central nursery or a dispensary licensed under section 8. Senator Benguche made reference to the Government now wanting to, for want of a better word, be a dealer? What is wrong with that in the Government owning the repository for seedlings and plants and that sort of thing? That is a way of controlling the industry. That is a way of regulation. This is a balancing act that needs to be done because in promoting this new growth business venture it is also attracting investors and that cannot be lost or underscored by a, to be fair and measured, by a purely Christian reaction to the use of a plant which has been in use for a long time, much like opium, poppy, among the indians, the amerindians, much like our own culture who before now used to make, what they call it? Spuddy and that sort of thing before, through the prohibition so we have to balance bringing in investors and enabling Belizeans to have an equal stake. “

While the bill was passed, it will not be enforced until a month’s time. This will provide additional time for further consultations and possible amendments.