And things got a bit testy when senators debated a seventy-five million US dollars loan from the Government of Taiwan. The loan is for budget support and this has been done under both past administrations. But while it has become a norm, senators today question the amount. here is that exchange. 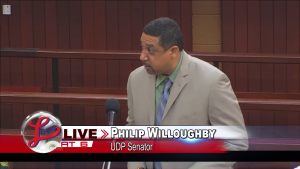 President of the Senate: “Your point of order Leader of Government Business ?”

Senator Eamon Courtenay: “Have a seat.”

Senator Philip Willoughby: “No we will act with decorum sir.”

Senator Eamon Courtenay: “Have a seat.”

Senator Philip Willoughby: “We will act with decorum sir. You don’t need to tell me have a seat I know sir.”

President of the Senate: “Senator. There’s a point of order. Leader of Government Business.” 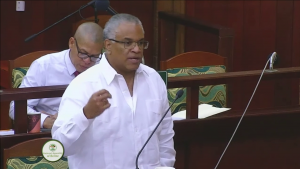 Senator Eamon Courtenay: “Madam President I understand the puerile emotions and infantile contribution but standing order thirty six one debate upon any motion there or amendments shall be relevant to such motion bill or amendment and a Senator shall confine his observation to the subject under the discussion. Madam President I ask that Senator Willoughby be brought within the standing orders. He is not only being trivial and repetitive which is prohibited by the standing order but he is not relevant to the motion before. I understand his proclivity for south side Belize and I understand his failure in south side Belize but it is not the matter before the Senate this morning.” 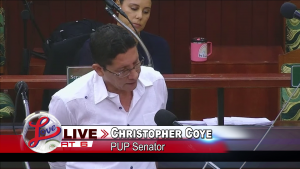 Senator Christopher Coye: “This $75 million dollar loan motion was at no time a secret. Senator Willoughby referred to the Prime Minister’s budget speech and as part of that budget speech the comments by the Prime Minister included the reference to a $150 million dollar loan from Taiwan. That’s because the budget itself has a primary surplus but an overall deficit. What that means is that you have to make loan payments over and above interest. You have to pay for principal and while we look forward we are affected by what has been done in the past. And as far as the past is concerned in a matter of twelve years the debt of this government went from $2 billion to $4 billion dollars.”