A week ago, history was made. It was the passage of the motion, which saw the posthumous pardon of Nora Parham. She’s the 36-year-old mother of eight, who had been the victim of domestic abuse at the hands of her then-husband, Ketchell Trapp. Parham was hanged in June 1963 for lighting a match, which set alight the latrine Trapp was in. It was in that blaze, Trapp, a policeman, died. During today’s Senate meeting, there was unanimous support for the pardon from Senators. Parham’s cousin, Senator Beverly Williams spoke on the motion. Alongside her were Senators Elena Smith and Janelle Chanona. Senator Michael Peyrefitte also apologized to the Parham family and encouraged the PUP to apologise. Senator Eamon Courtenay also spoke on the motion.

Senator Beverly Williams: “This egregious miscarriage of justice has caused an indelible stain that is forever etched in the annals of our Belizean history. Like her children I do not believe that Nora was guilty, I do not believe that she lit the match. Like Pinita Espejo I believe that her statement was changed. She never locked that latrine and again she never ever lit that match.” 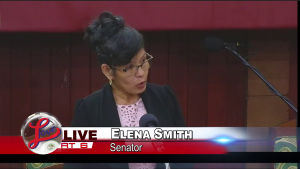 Senator Elena Smith: “We all would have preferred an exoneration for her because we all believe that what transpired was unfair. She was not given a fair chance. She was not listened to but we also know that we have to work within the law and the law at this time only allows for a pardon.” 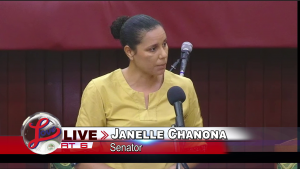 Senator Janelle Chanona: “Ms. Parham’s story is not concluded. There is not a full stop now but truly that she becomes more than the victim that she was but truly the catalyst that she can be and that she can break – as others have called it – this cycle that we are playing out because and I think it was even the Prime Minister himself that called out that 99% or some very high number of our homes are dealing with some form of violence that’s incredulous.”

Senator Michael Peyrefitte: “This government should be commended for bringing the motion that we can fully support and while we do Madam President both sides give condolences and we feel the pain of the family of Ms.Parham I think the family also deserves Madam President from both sides of the house official apologies. And so for taking so long or for never bringing this matter to the National Assembly in our case Madam President on behalf of the UDP I would like to offer a heartfelt apology to the Parham family and to reiterate to them that we supported her clemency then, we support it now and we are in fully support of this motion and I think that even though the PUP has to be credited for bringing this motion I think it would be useful as well given their history in this matter for them to offer their own apology to the param family.”

Senator Eamon Courtenay: “This motion has brought a sense of maturity, a sense of unity and a sense of nationalism where across the political divide and joining with the social sector I think there is a renewed commitment to dealing with this issue. It’s not easy, it’s not going to be done overnight but we have to move and I believe we are moving in the right direction.”

After the meeting, Giovanna Moguel also spoke to the Senators for Government and Opposition business about the significance of the motion. Senator Courtenay says this encourages more debate on the issue, while Senator Peyrefitte added that Parham’s story is one that hopefully encourages more victims to come forward. 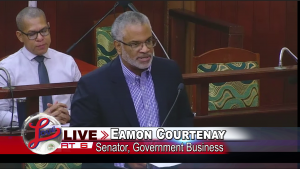 Senator Eamon Courtenay:  It’s never too late to do what’s right I think that’s the first thing. It’s unfortunate that it has taken so long for this action to be taken but it has been done and we are now moving on the process to try to get her pardoned and I think that’s historic and I think it is good. I think it also allows the society and us as legislators to focus on the question of gender-based violence it is too prevalent in society. Tremendous amount of work is being done by Minister Dolores and by the special envoy and also by  other civil society organizations to address perceptions,  to change policies, to change people’s view and of course we have to strengthen the police and to get prosecutions and convictions for persons who were involved in gender-based violence. So this motion for the exoneration and the pardon of Nora Parham focuses the nation’s attention on this problem that we have.”

Senator Michael Peyrefitte: “One of the important aspects in the Nora Parham case is that we pay so much attention to the fact that she was hanged, remember at the time there was no appellate court, there was nothing of the sort for her to have recourse to but what Ms.Parham must be even credited for the system failed her because she did what we encourage victims of domestic violence to do today. She kept reporting it: “I am being abused, I am being abused I am being abused.” So hopefully the recognition of her bravery could yield the results that more people who are abused in domestic situations are brave enough to come out and make the reports. And make the report and not only make the report but when the the time comes for you to go to court to actually show up and testify. But when we passed the recent domestic violence legislation I had said for example that if there are witnesses to a domestic violence situation we should add to that piece of legislation – which we haven’t added – we should add to that that if you have a third person who witnesses domestic violence then that third person evidence should be good enough to proceed with the case because many times victims are abused, they do make the report, the very few make the report and even fewer than that actually follow through by going to the courts. Hopefully our laws can get to the point where if somebody witnesses it you don’t need the virtual complainant, you don’t need the abused person as the only evidence required to convict a person who is an abuser so from her story learn that she did her best, she reportedly the abuse,  she consistently was complaining to the authorities that’s what you should do. The system failed her then but please be encouraged by the efforts she made to expose the abuse she was suffering.”