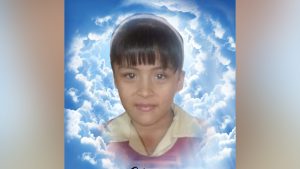 A very heartbreaking and emotional image of a mother gripping the dead body of her daughter was shared by hundreds of Belizeans last night on social media. The image stirred controversy as many are saying that the child’s father should not have posted the images of the grieving mother, mourning the death of her seven-year-old daughter. The child drowned earlier in the day in Santa Familia Village, Cayo District. What was to be a relaxing afternoon with her godmother turned tragic as the child went under. Reporter Vejea Alvarez teamed up with Cayo Correspondent, Eliu Yacab for the following story.

Vejea Alvarez, Love FM News: Less than three weeks ago the family of Luciany Thompson was celebrating her 7th birthday but now the family is planning her funeral service. On Monday evening the minor reportedly drowned while swimming in the Macal River in Santa Familia Village.  According to her mother, 25 year old Marina Vidal, Luciany was spending time with her godmother when the incident occurred.

Marina Vidal, Mother of Luciany Thompson: “The story started when her godmother, Ms. Mary Arnold, messaged me that she wanted her to pass the day, or the three days, with her at home. So we gave her permission to take her to her house and then from her house to school and then she called me. I was on my way from Belize City to San Ignacio when she messaged me and told me to go to her house immediately. I called her again and I asked her if everything is okay with Rebecca and she said just come now.”

Vejea Alvarez, Love FM News: And when Vidal and her husband arrived, their worst fears became a reality when they were told that Luciany’s body was lying on the banks of the river. 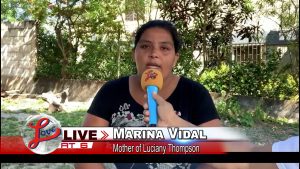 Marina Vidal, Mother of Luciany Thompson: “And when I reached up there, I saw her, Ms. Mary Arnold, at her house and she told me and my husband to sit down, she has something to tell us. I didn’t sit down. Actually I looked around. I didn’t see my daughter and I told her, Ms. Mary, is everything okay? Where is my daughter? I told her and she couldn’t tell me anything. One of her neighbours told me she drowned in the water and she’s all the way down the stream and I ran to where she was. When I reached there, my daughter Rebecca was on the floor lying covered with a white sheet under a big tree and she said that she took her to a shallow spot where they were bathing. All of a sudden, I met her under a tree where it was really deep.”

Vejea Alvarez, Love FM News: Vidal says that she had already informed the child’s godmother that she couldn’t swim and warned her about taking the minor to the river. However, that never happened.

Marina Vidal, Mother of Luciany Thompson: “She just went there on Sunday evening at about 4. She came to pick her up at my house and before she left she asked me if she had a bathing suit. I told her no. I told her she can’t swim. So I didn’t know she would take her to the river. When she reached home, I messaged her and I told her, have you reached home? She said yes, me and Luciany just reached home off the river happily. I said please, I called her on Whatsapp and I said not to take her back because she doesn’t know how to swim. She said it’s okay, she’s, I will not take her and I don’t know why she still took her when she had already told me that she wouldn’t take her to the river anymore.”

Vejea Alvarez, Love FM News: Vidal described her daughter as a caring child who was full of joy. She says that the pain of losing her eldest child and her only daughter will remain with her for a lifetime.

Marina Vidal, Mother of Luciany Thompson: “She always used to be happy, always working and everything. She used to help me in the house with her little brothers. You know what I love from her is that every night she would go to sleep, she would put my younger son to sleep and sing songs for them, put cartoons on the laptop because she was really active. She used to use her own laptop. She loved her brothers. She was always there for us. I don’t have any words to explain. It’s really hard for me. It’s my only daughter and the oldest one. You know a mother’s love for her kids is really strong and no words can explain and no words can fill that broken heart back. My two little boys are really asking for her and I don’t know what to say.”

As the family of Luciany Thompson mourns her death, there is another side of the story. Mary Arnold, the child’s godmother spoke to Freelance Reporter, Kent Pandy where she explained that the child was left in her care. She says the child was with her at her home in the Carmelita Gardens area of the village while her family traveled to Belize City. Arnold recounted the incident saying her bad knees kept her from being able to save the child when she was swept away the strong river currents.

Mary Arnold, Godmother of Deceased: “I took her to school, brought her home. We went to the river the first day and came back. She went to bed, got up and I don’t know what happened. Tues, um.”

Mary Arnold, Godmother of Deceased:  “Monday I took her to school not Sunday right and then I picked her up and we came out here and had some lunch and she wanted to go to the river and I said not yet. So she was doing some painting and things around here and finally I called to check on her laptop that I’d dropped off at GS and they said it wouldn’t be ready until today so I said okay let’s go to the river for a few minutes and she grabbed her towels and her little duck and we went to the river and this wa maybe 4 o’clock and we went down to the shallow end and we started playing and splashing and then she didn’t see her duck and wanted to go after it and I said no it’s, just leave it. It’s just a toy come here and next thing I know she said *expletive* It’s water. You know? We were in still water, water that she could stand up in and then all of a sudden she just swept away. She wanted to get the duck but she was maybe two metres from me you know, three at the most, not very far and then I realised that she was in fast water. I tried to go in after her but I just kept falling and then I knew I had to go get some help because I knew that I wasn’t going to be able to get her.”

Reporter: So you left her there and came to get help?

Mary Arnold, Godmother of Deceased:  “We had taken the car because we had walked down there the day before and I was too sore to move at night so we took the car. Well I came up and I yelled help and I could see there was nobody around and I got in the car and started beeping the horn in trying to get help. Then I came up here because I knew there people here and they immediately went to the water. Two other guys and I went down too and then Dalia came on her motor scooter and helped me get out of the water and then somebody went down too and got their kayak to look and then other people came and they had snorkels and stuff. I waited for a while and then I came down here. I thought I would look to see if she floated down river.”

Police are yet to issue an official report on this drowning incident.