A man who was convicted of murder attempted to escape this morning. Shane Bennett was found guilty of murder by Justice Antoinette Moore in the southern session of the Supreme Court. After hearing the verdict, Bennett reportedly bolted through the door before being captured a few minutes later. He is found guilty of murdering 37-year-old Anthony Parks. Parks was shot four times as he sat on his veranda in Independence Village, Stann Creek District on January 22, 2020. He succumbed to the injuries days later. Parks’ family told Love News that they are pleased and satisfied with the verdict. The family says that Parks wanted no revenge, just justice to be served. They now await Bennett’s sentencing. 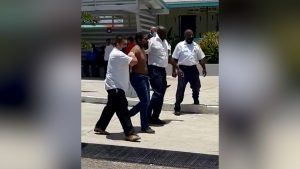