The Duke and Duchess of Cambridge will be arriving in Belize on Saturday. The Royal’s visit is a part of a tour in the Caribbean to commemorate Her Majesty the Queen’s Platinum Jubilee. Many believe that the tour is also to strengthen ties with countries in the region that still recognize the Queen as the Head of State. In November last year, Barbados officially removed Queen Elizabeth the Second as its head of state and has become the world’s newest republic. In the wake of the Royal’s visiting the country, many are questioning if Belize should do the same. It’s a question that was posed to Minister of Public Service and Constitutional and Political Reform Henry Charles Usher. Here is how Minister Usher responded. 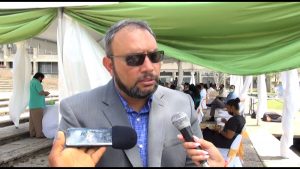 Henry Charles Usher, Minister of the Public Service, Constitutional and Political Reform:  “Well I welcome the Duke and the Duchess to Belize. This is a beautiful country. I’m glad they’re finally getting the opportunity to travel to Belize to see Belize. Certainly as to a benefit to the country, well the exposure that we will get internationally through their visit with the media houses that will be represented here, with the tourism opportunities with their visit. I think, you know, it’s always good to have these types of visits and to use it as a way to showcase what Belize has because we have a lot to offer the world and certainly we want to make sure that we show them a good time when they’re down here. I believe that the discussion on whether to keep the Queen as the Head of State is one that has to happen. It’ll be part of the People’s Constitutional Commission’s mandate to look at whether we want to remain within having the Queen as the Head of State and certainly it’s one that I believe that Belizeans will have their say in terms of going forward. So I wouldn’t want to prejudge that consultation process but certainly, we have to look at what is the best form of government that we want in our country.”

Love News will be covering the Royal visit starting with their arrival on Saturday afternoon.