Cases of domestic violence and sexual abuse have been so prevalent in today’s society that many argue that it has become a norm. According to the Belize Crime Observatory, between January and September of last year alone, there were one thousand seven hundred ninety-four reported cases of domestic violence. The Belize Network of Non-Governmental Organizations (BNN) has come out to fully condemn these violent actions towards women and children. The organization is now calling for a collective response to breaking this vicious cycle. According to the president of Haven House, Doctor Sharmayne Saunders, the NGO’s are trying to strategize more proactive methods to tackle the issue from the root to break the cycle.

Dr. Sharmayne Saunders, President, Haven House: “We also recognize that  the state does not provide services either for domestic violence these services are provided primarily by NGOs. There is no provision also for the batterers, there is no provision for therapy there is no provision for services you know so there is also that complication as it relates to domestic violence with women and children. Our mandate is not to address the batterer but we must understand that there is an integration between the two if we’re trying to solve or eradicate that problem then we also must collaborate with the ministry and our other NGOs to address the matter from the batterers perspective as well.”

While the NGOs can’t take on this challenge alone, Doctor Saunders says they have reached out to the Ministry of Families to facilitate a more holistic approach. The CEO of the Ministry of Families, Tanya Santos-Neal, explained that although there aren’t enough safe homes around the country, the ministry plays an active role in placing all victims somewhere they are protected. 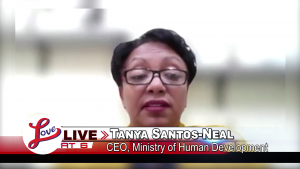 Tanya Santos- Neal, CEO, Ministry of Human Development: “We do have safe houses that if women need protection or they’re seeking protection we can place them. If you are from Stann Creek for example and you can seek safe protection, we can get you out of that situation even if it means removing you from the district we do that, we do give safe spaces for women and their families and their children if that is required. There are these safe homes going back to the questions there are the safe homes, the awareness that we do for victims the public awareness, we go out to schools, to communities, to workplaces and do public awareness sensitization on these issues but we do provide protection to various forms of protection to victims.”

Doctor Saunders added that apart from therapy and treatment, there also needs to be legislative changes that would assist the victims of domestic abuse.