Tonight, the police department is dealing with yet another incident of police abuse that was caught on camera. The incident unfolded last Friday at the Barry Bowen Municipal Airport in Belize City and involved two officers and a civilian. The video was posted to social media over the weekend and has since sparked public outrage with many including the police department condemning the actions of the officers. Reporter Vejea Alvarez spoke to the men at the center of the ordeal. Here is that story. 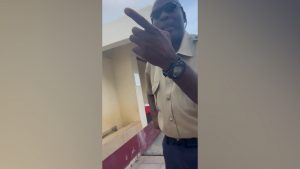 Vejea Alvarez, Love FM: This amatuer recording captures the moment when 19 year old tour guide in training, Shamar Foster, was assaulted by a police officer on friday evening in front of Maya Island Air. The footage shows Foster being searched by an officer who is using obscene language and is threatening to arrest him on bogus charges of assaulting a cop. According to the victim, the incident unfolded after he was approached by a police mobile that was patrolling in the area.

Shamar Foster, Tour Guide in Training: “I was at Maya Air with a couple of our guests minding my own business when this police mobile came in. So they came in. They parked the mobile. Two officers hopped out, one a male and the other a female. The male police officer then approached me and asked me for a search. I then asked him “What are you looking for?” “Who sent you?” “Why are you searching me?” He then replied and said that I should not, never, ever, question the police authority, just stand up and let me search you. So I put up my hand but at the same time, I was videoing him so he boxed after my hand and I pulled back a little bit and that is when he started getting aggressive. He held his gun and asked if I want this to get nasty and then after that he grabbed me in my shirt and told me that he is taking me to the station and that he would charge me for assaulting a police officer. That was when the bystander came out and intervened.”

Vejea Alvarez, Love FM: That bystander, Eric Andrews, is Foster’s employer and a relative who recorded the entire ordeal. Andrew’s says that the incident was uncalled for and did not need to escalate the way it did and according to him, the officer in question also reeked of alcohol. 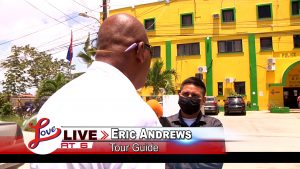 Eric Andrews, Tour Guide: “When the police officer went into that rage with him, myself and all the workers there at Maya Island Air, including those tourists, everybody was shocked, like what was going on? What was going on? And I was scared, mien, I was wondering if this was going to be another Laddie you know? We have the person that’s supposed to protect us attack us and I’m glad that camera was there. I quickly became a part of that recording because that police officer was not normal. This guy was in a rage and in his yelling, I mean, I could smell the stench of alcohol coming out of his breath so it is obvious that he was under the influence of something.”

Vejea Alvarez, Love FM: Andrews says the moment when the officer starts clenching his weapon and asking Foster if he wanted things to get nasty made him wonder if Shamar would have suffered the same fate as 14 year old Laddie Gillett who was shot and killed by police last year.

Eric Andrews, Tour Guide: “In the process of what was unfolding, I was wondering if this is another Laddie? Is this another young youth getting hurt by the hands of those police that should be protecting them? I saw it uncalled for. I just wish. I just wish that the Police Department that I have so much great respect for, I hope that the department would finally do something about this officer. Let’s set an example of him. The video that was captured clearly shows exactly what transpired there at the airstrip in front of the people this guy served. So I think that and I hope, I hope that the police can truly deal with this officer.”

Vejea Alvarez, Love FM:  And the police will be making sure that the officer who assaulted Foster is dealt with swiftly. ASP. Fitzroy Yearwood spoke on the matter. 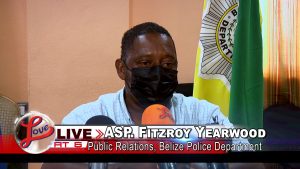 ASP. Fitzroy Yearwood,  Public Relations Officer, Belize Police Department: “I have seen the video about six times. It was sent to me by friends, of course. It’s very unfortunate that our police officers operated in such an unprofessional manner and I can assure the general public that our Commissioner of Police and our Minister of Police don’t tolerate behaviours like this. Well the Commissioner has made his directions to the Professional Standards Branch and I will update you as to which course the Professional Standards Branch takes against these officers.”

Vejea Alvarez, Love FM:  All in all, Foster says he’s still shocked as to why the officer behaved in such a belligerent manner when he was simply trying to do his job.

Shamar Foster, Tour Guide in Training:  “I feel very bad. Even the reason why I asked why is he was searching me is because I was with my guests. I can’t just let this police officer just come and search me in front of my guests. How would that look on me, right, you know so that looks really bad on the Belize Police Department. That happened in front of tourists. It brings a black eye on the tourism industry in Belize and I just want justice. I want something to be done.” 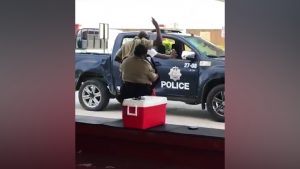 Vejea Alvarez, Love FM: Both the Minister of Home Affairs, Kareem Musa, and Leader of the Opposition, Moses “Shyne” Barrow, have condemned the actions of the officers in this latest incident. Reporting for Love News, I am Vejea Alvarez.