The Belize Central Prison, located in Hattieville, is currently home to one thousand and thirty-five inmates. Three hundred and fifty-five of those people are individuals who are on remand awaiting trial. Of those three hundred and fifty-five, more than half are there for a murder charge. The prison’s director Virgilio Murillo explained on today’s edition of “The Morning Show” that those figures represent a steady improvement compared to years past when more murder suspects were in the facility. 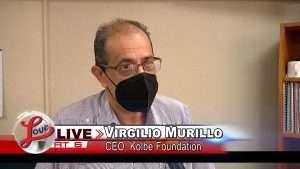 Virgilio Murillo, CEO, Kolbe Foundation: “That looks good today, years ago that was worse than that. Years ago it would have been almost 50% and thanks to the former Chief Justice Kenneth Benjamin he started the process of reducing that number, either giving bail or speeding up their trials of these guys those kinds of things so that is what brought it down because it used to be almost 50% if I’m not mistaken but still we’re not doing too bad because in other countries in countries like Africa or even the US where at least 50% or upward or 50% are awaiting trial, even in England and these are what you call first roll countries who have all the resources and whether it’s financial, human or whatever. Comparing Belize with other countries that I believe for argument sake even Costa Rica I have attended a few sessions in Costa Rica and I would get the sense that that the United nations is deep in places like Costa Rica even New Zealand, I’m looking at places like Australia these are places that set standards and if you read on them you would imagine that they are the gurus when it comes to prison management but – and I know the prison cannot control who comes to them we have no control over that because that has to do with the security apparatus they have in their respective countries just like we do but we certainly have been bringing down the numbers consistently since 2012. Those numbers all of them the majority of them with the exception of 2021 the digits were gotten from a site called prison world brief so you can go and verify those numbers right there but it just goes to show how Belize is doing. If you look closely only Netherlands seems to be close to us.”

Murillo also noted that between 2016 and 2020, six hundred and ninety-three women were incarcerated. Sixty percent of those women were at the prison on an immigration related offence.