The Belize Hotel Association, on behalf of its one hundred and four hotel membership, have expressed concerns on the recently announced travel insurance requirement for tourists. According to a release from the BHA, the discussion over travel insurance surfaced back in October 2020. Thereafter, consultations were held with their members and a response went out to the Belize Tourism Board on October 5 expressing the association’s disagreement. In its release issued today, the association stated furthermore that on November 4, at a BTB Board meeting, the BHA once again voted against the insurance policy. The opposition reportedly surrounds three points of concerns, namely, 1. it would make Belize a more expensive and less attractive destination; 2. The plan to identify just one insurance company to issue the travel insurance; and 3. More fleshing out of how the process would work is needed. Love News spoke with the Director of Tourism, Evan Tillett, who explained the rationale behind the new policy from a BTB perspective.

Evan Tillett, Director of Tourism, BTB: “We have been looking at insurance that would help us to mitigate the effects of the pandemic for some time. Currently omicron is spreading throughout the globe and we feel that the insurance will provide with a level of protection and comfort and peace of mind actually for both the guests but also in terms of the trip cancellation part of the policy it also protects the hotels locally here in Belize. I think that you have a lot of territories and countries that have implemented travel insurance but each territory tends to tailor make the insurance based on the need of their country and so we did the same. We looked at the different options available and we felt that we developed a product that is in the best interest of the industry, that will protect the industry and give the guests peace of mind so when they travel to Belize they know that they are safe.”

As it relates to the BHA’s concern over the exclusivity given to the Insurance Corporation of Belize, Tillett explained that other insurance companies could apply for inclusion.

Evan Tillett, Director of Tourism, BTB:  “The way it is is that we are working with one insurance company which is ICB initially in terms of rolling out the program. However it’s not a monopoly situation, other insurance companies that want to participate in the travel insurance program can contact the BTB and present their proposal and we are open to that.”

Reporter: If other insurance providers have a buy in in this plan will that rate change?

Despite the explanations given, the Belize Hotel Association asserts that those are still insufficient grounds for such a major decision. While the BHA is in disagreement and had voted against the policy, President of the BHA, Alina Saldivar, commented via text to our newsroom saying that the overall general consensus of the membership does not view the idea of insurance as a bad one, but there are concerns. The association also pointed out in its release that it is rare that a tourist is hospitalized in the country due to Covid-19, and when it does occur they are capable of paying their medical bills. The policy comes at a cost of eighteen US dollars and provides coverage for up to fifty thousand U.S. dollars in medical expenses relating to the treatment of COVID-19 for a period of 21 days. The plan will reportedly come under Belize’s public health regulations and provides for quarantine-lodging up to a value of two thousand US dollars or a maximum of three hundred US dollars per day (this is the only benefit that the BHA applauded in its release). The coverage will also provide for emergency assistance services such as air evacuation and emergency expenses related to pre-existing conditions. It also covers trip cancellations and expenses incurred by COVID-19 positive travelers for extended stays. The insurance requirement comes into effect on Tuesday, February 15. 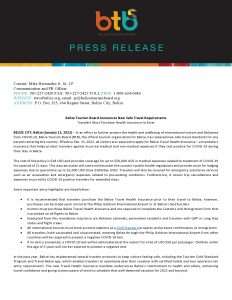 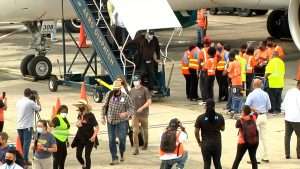