If ever the saying, “touch one, touch all” applied, it is proving true tonight as the Belize National Teachers’ Union (BNTU) is taking a stance against the Belize Bank Limited in support of its sister union, the Christian Workers Union (CWU). The BNTU during a Council of Management meeting decided that all its bank accounts with Belize Bank Limited will be closed. A release from the BNTU states, quote, “after in-depth discussions were complete, our Council unanimously voted that we will stand in full support and solidarity with our sister Union, the CWU, and in so doing, our action, in the first instance, will be to withdraw all our Union’s accounts, those of both National and Local Branches, from the Belize Bank Limited.” End of quote. It’s a major move against the Ashcroft owned bank, but the BNTU says its decision was based on what stevedores are going through following the Supreme Court’s ruling for an interim injunction on the one point five million dollars paid by the government to the stevedores. According to the BNTU, this is only the first move as there are others in motion to defend and stand in solidarity with the CWU. As we’ve been reporting the Port of Belize Limited (PBL) has commenced legal proceedings against stevedores and CWU, seeking damages to the tune of 1 million dollars after stevedores carried out a strike action against the port. The BNTU is also calling on all other sister unions under the NTUCB umbrella, to fully consider the dire implication that the court cases against the CWU can have on all unions. The release from the BNTU ended, stating, quote, “the trumpet call of unionism is ‘Touch One Touch All’ and therefore the time to come to the aid of our sister union is Now!” (End of quote) In the coming weeks, the BNTU’s Council of Management will engage teachers to commence further actions. We will keep watching and reporting. 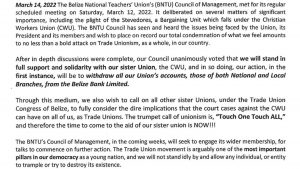