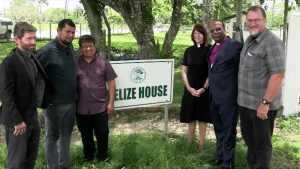 The Churches today have fulfilled its pledge to deliver more than the required number of signatures to the Governor-General. These signatures are from thousands of Belizeans, who want to participate in a referendum on whether marijuana should be legalized. Dale McDougall has the following report. 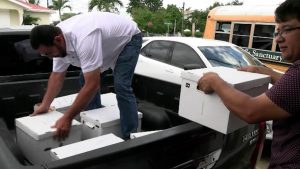 Bishop Alvin Benguche, Senator: “For us, at this time, we decided to present these petitions because we think that it is a backward and retrograde step being undertaken in the name of “New Growth Industry.”

Dale McDougall, Love FM News: That’s essentially the main theme of the campaign by Belize’s church leaders to trigger a referendum on the legalisation of hemp and marijuana in Belize. On Tuesday, those religious leaders from the Methodist, Catholic, Anglican, and Evangelical churches delivered more than 21,000 petitions signed by Belizeans across the country to the Governor General, Froyla Tzalam. The churches argue that those Belizeans are insisting that the Government must hold a referendum on this important issue. Senator A. Moses Benguche, Bishop of Belize’s Methodist Church, explained outside Belize House that a wide cross section of Belizeans hopes the Government reconsiders its stance.

Bishop Alvin Benguche, Senator: “The signatures represent the voice of the Belizean public. It includes a former Prime Minister. It includes bankers, CEOs of different companies across the length and breadth of this nation. It represents people from every walk of life, Rastafarians and community leaders. It is telling us here and now that though this petition for referendum was first proposed by the church, it is no longer just the church calling for a referendum but it is the entire country of Belize.”

Dale McDougall, Love FM News: One of the most vocal advocates for referendum is Pastor Louis Wade. Not only is he confident that the signatures can withstand any scrutiny in the vetting process, but by and large, people’s voices need to be heard. 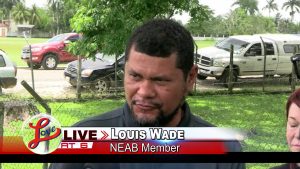 Pastor Louis Wade, NEAB Member: “We believe that we live in an open society. The Government needs to prove that by abiding by the rules of the Referendum Act, validating those signatures because they have come from the church and we’re beginning to have a problem in the sense that the question of whether or not there was consultation needs to be addressed because the church is saying, clearly that there has been no official consultation.”

Dale McDougall, Love FM News: Wade also argues that the call for meaningful consultations must include families living in rural areas where he says the drug has had a widely negative impact.

Pastor Louis Wade, NEAB Member:  “Belize is a country both of urban and rural communities, villages that are integrated for a thousand years, for hundreds of years that are now being ripped apart by this issue of marijuana and a don that has now come to live in their community and has taken on their young people, as their, either as their clients or as their gangsters. So Belize is not just southside. Belize is a multiplicity of communities across this nation.”

Pastor Louis Wade, NEAB Member: “Yes 65% are rural and so we say that the marijuana issue is a paper tiger and Belizeans, even many who themselves are addicted to the herb.”

Dale McDougall, Love FM News:The Bar Association’s 17 page document does not indicate its position one way or another but it does suggest that “A referendum does not legally bind the Government to its result so the Government may still pass the Bill legalising the production and sale of marijuana even if the majority votes against it in a referendum. This is because the results of the referendum are to advise the Government but cannot bind the law makers.” It adds “Courts have found that the sanction, if any, for a Government who fails to abide by the results of a referendum is a political one.” Indeed, but for the time being, the Elections and Boundaries Department will have to go through those signatures. In a short statement today, Government indicated that it will shepherd the process, describing today as inspiring and encouraging for democracy. It’s a system that churches, however, insist must remain open. Dale McDougal, Love News.

While the churches are doing its victory lap in delivering what they say are more than enough valid signatures to trigger the referendum, the law does provide for people who are 21 years and older to get a Cannabis ID to have the substance for personal use. That ID will cost fifty dollars for locals and 100 dollars for tourists. However, the churches say that even with these provisions, there will be slippages. More than that, Church Senator Moses Benguche says that this is a new industry that Belize simply does not need.

Bishop Alvin Benguche, Senator: “Yes presently, as it is in the bill, there is an age limit. But, you and I know that we live in a country that in a sense is very porous. We allow our children, our underaged children, to go out and to buy whatever we want them to purchase and that is a fact that from the time you’re a child, you can be sent to wherever to purchase whatever it is for the adult and so, though we have those mechanisms in place, I continue to ask again about the policing aspect. And so for us as a church, we have done our part and we will continue to do our part in so far as educating the public on some of these things. But we must also allow the public to become knowledgeable of some dynamics that are in place, the loopholes that are in place and we, as the church, also have to speak to those loopholes.”