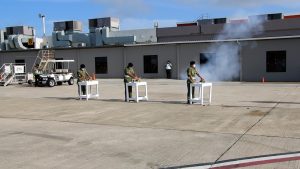 The Duke and Duchess of Cambridge are on the final leg of their visit in Belize. The couple are currently out west where they are currently being hosted at a a reception in the Caracol. The reception follows a tour of the Chiquibul Forest Reserve earlier today. On Sunday, the royal couple concluded their visit of the south in Hopkins Village where they were hosted at a Cultural Garifuna Festival. The Royals danced with villagers to the cultural music and also met with several conservationists in the village. Senior Reporter Hipolito Novelo and Videographer, Brian Castillo have been following the tour and filed the following report on the weekend’s events, starting with their arrival at the Philip Goldson International Airport. 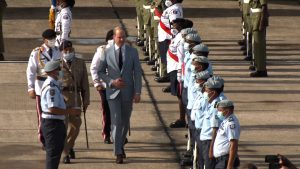 Hipolito Novelo, Love FM News: Prince William and Kate setting up some Punta moves in Hopkins Village on Sunday. The Duke and Duchess of Cambridge arrived on Saturday. Belize is their first stop of their royal tour coinciding with the Queen’s Platinum Jubilee celebrating Her Majesty Queen Elizabeth II’s unprecedented 70 years on the British throne. The royal couple touchdown in this Voyager Ministerial jet just after 3pm. The Royal Highnesses were first greeted by the Queen’s representative, Governor General: Froyla Salam and then by the CEO in the Ministry of Foreign Affairs: Amalia Mai before being greeted by the Guard of Honour in the Belize Defense Force and a gun salute. Prince William then inspected the personnel during which he exchanged a few words with an officer of the BDF’s Air Wing. That band continued playing military tunes as the Duke and Duchess made their way to Foreign Minister Eamon Courtenay and the British High Commissioner Claire Evans. A Royal Convoy then escorted the Cambridges to the Laing Building in Belize City to meet with Prime Minister John Briceño and Special Envoy for the Development of Families and Children Rosanna Briceño. After speaking for a couple minutes both couples emerged. P.M. Briceño said it was a distinct pleasure for them to welcome the royals to Belize. Prince William and Kate then headed to the municipal airtstrip where their helicopter was waiting and so was a small group of Belizeans and as the royals drove by Belizeans waved and so did the royals. Their first day in Belize was over and they flew off into the evening. Reporting for Love News, Hippolito Novelo. 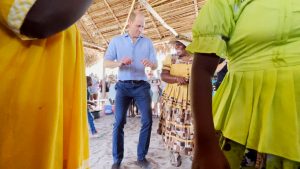 Hipolito Novelo, Love FM News: Day 2 of the royal’s business started in the south meeting the Saqui family who for the past 10 years have grown Che’Il Mayan Chocolate. After a cultural presentation, the Cambridges learned about the process of making chocolate and other Maya dishes. They tasted the raw cacao and how to grind cacao seeds. They both gave it a try and they also tried the chocolate before bidding the Saqui family goodbye and telling Hopkins hello. And in Hopkins the people there were very welcoming. Students waving the Belizean and Garifuna flags greeted the royals, so did village residents. The Camrbidges were treated with the full works, an exciting Garifuna festival during which they tasted Hudut and Sahou and of course they had to Punta. The rhythm of the Garifuna drums called for it and the royals answered. The Duke and Duchess also planted a tree on the beach and participated in the unveiling of a plaque. They then took a long walk along the beach before meeting the leaders of the conservation community. 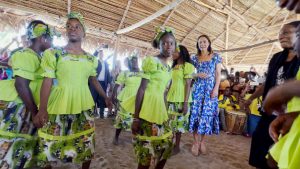 Conservation Community Member: The meeting was very short and sweet. So we discussed climate change, the coral restoration work that Fragments of Hope does. We are based in Placencia. We had hoped there’d be a visit of Laughing Bird Caye but weather and logistics cut it short so we just had a quick meeting with a bunch of influential Belize folks here in Belize and we discussed. Personally I discussed the coral restoration work and shared some of the colouring books and puzzles that we’ve done to educate the children and the schools and highlight some of the Elkhorn and Staghorn corals and the biodiversity and the importance of coral reefs.

TIDE member: It was an opportunity to meet with them. I was able to speak about our community engagement in conservation, engaging children, the youth and also resource users. They were very receptive, very interested in the work that Marine Protected Areas Managers do in Belize and very impressed. Of course they’re going out to actually experience a marine protected area.

Conservation Member 2: I think it was a pleasure to meet with them, engage with them, speaking about the conservation work we are doing within the country. Of course the partnership, all the efforts and collaboration that goes into making sure that we are able to push for and advocate for better conservation management for the natural environment and our coastal marine environment in particular. They were very receptive to what we were saying. I spoke about actions related to climate change and how we need to make sure we effectively factor in climate change risks into our management, sustainable management, the important role for involving stakeholders, the local communities in assessing their risk and vulnerability and helping them to identify ecosystem base. When we say ecosystem base, how can the natural environment and ecosystem help you to protect yourself from losing risk, like protecting mangroves for example. So the engagement was about that. Of course it was a short time but we enjoyed the discussion. It was a pleasure to share with them what they are doing and so not only for the benefit of Belize but globally so that they can go Belize is on the map and that we are trying to achieve, you know, work towards achieving sustainable development but in an environmentally sound manner.

Hipolito Novelo, Love FM News: Prince William and Kate accompanied by the Blue Bonds Director, Beverly Wade, walked on the pier and from there the royals bid Hopkins goodbye. Reporting for Love News, Hipolito Novelo.
The visit by Prince William and Prince Kate marks the Royals’ first stop on their tour in the Caribbean to commemorate Her Majesty the Queen’s Platinum Jubilee.