Today, the Football Federation of Belize (FFB) held a press conference to introduce the players of the female under-fifteen National Team that will be representing Belize in Costa Rica. The team will be competing in the UNCAF tournament qualifiers for the next seven days. Reporter Vejea Alvarez was there and has the story.

Vejea Alvarez, Love FM News: Belize’s female Baby Jaguars are heading to Costa Rica to participate in the UNCAF Qualifiers Tournament. The under 15 squad will be competing alongside seven national teams from Central America and the Caribbean. The team trained for a little over two months and, according to head coach, Joseph Waight, these  players are ready to rumble. 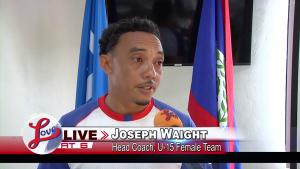 Joseph Waight, Head Coach, U-15 Female Team: “A bit challenging being that it was a very green group that we have brought in. A lot of them for the first time are being exposed to playing organised  football but with the time being given to prepare them, I believe between me and the coaching staff, I’ve done a fair enough job to at least have carried out the various topics we need to carry out on the field for us to give a good presentation of ourselves in this upcoming tournament.”

Vejea Alvarez, Love FM News: The team comprises 21 young ladies from across the country whose ages range from 11 to 15. It’s the first time that any of these athletes will be representing the Jewel on the international stage but 13 year old Jaysha Bernardez says she’s confident that the team will do great. 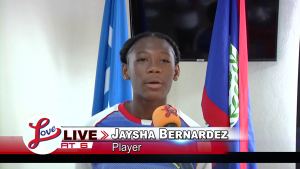 Jaysha Bernardez, Player: “I feel very happy and thankful that we’re getting this opportunity to go out and represent our country, and the way how we have been working out, we feel like we’re doing a great job. We’re improving a lot and hoping that we do the best out there.”

Vejea Alvarez, Love FM News: 13 year old Kenya Perez, the team’s captain who plays in the centre attacker position has been playing football since she was eight years old and she says this opportunity to represent her country is a dream turned reality. 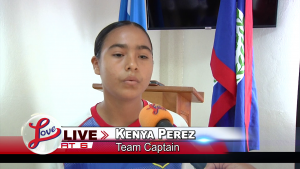 Kenya Perez, Team Captain: “I am excited about being the captain. I hope when we go to Costa Rica that we do a better game so we could win. I think we’ll do much much better. We will try to put our effort to win.”

Vejea Alvarez, Love FM News: These enthusiastic athletes will be competing in the group B category and they’ll face off against El Salvador and the Dominican Republic, two teams that the Head Coach described as stiff competition. Waight says he isn’t expecting the team to place in the tournament but hopes that the experience will prepare the team for future tournaments.

Joseph Waight, Head Coach, U-15 Female Team: “Playing against Central American countries is very tough. As you can see within the males, the competition they face and it’s the same thing they always gonna face with the females. So I believe that for the time being, we could give a good representation of ourselves but I wouldn’t go as far as the mark to say that we will take any top spot in the tournament because like I said the preparation time was a bit too short and I believe that as we go along working with the group, for sure, we’re going to be definitely competing in the future against these teams.”

Vejea Alvarez, Love FM News: The female Baby Jaguars depart for Costa Rica on Thursday and will be there for a week. Reporting for Love News, I am Vejea Alvarez.