While the fishers have launched a petition and written to the Ministry of Blue Economy expressing their discontent over the regulations, the Fisheries Department say it has not been formally approached. According to the Acting Fisheries Administrator, Rigoberto Quintana, in 2009 Belize signed onto a binding agreement with the Organization of Fisheries and Agriculture in Central America, OSPESCA, to change the required sizes for lobsters, the gap for lobster traps and the number of traps allotted to fishers. And, in 2019 OSPESCA wrote to the Government seeking a reason why there were delays in implementing the new regulations. This then triggered former UDP Minister Omar Figueroa to request an extension until December 2021, after the PUP formed government. Quintana concedes that no studies were carried out by the Fisheries Department to evaluate the lobster stock and to back up their change in regulations. He says , however, that consultations surrounding the changes were held with the cooperatives in 2013, prior to it being written into law, and in recent months. 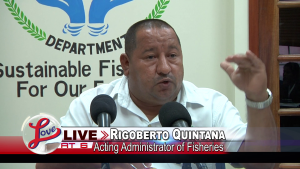 Rigoberto Quintana, Acting Administrator of Fisheries: “In terms of fisherfolk representation in Belize, maybe some fishers are not aware but we have the highest decision body in this country, which is the Fisheries Council and there we have four representation of our fishers. We have the Chunox Fishermen Association. We have the Hopkins Fisherman Association. We also have the two largest cooperatives, which they form part of the council and they participate in these decisions. Whether this information is not being channelled to the other fishermen is something that we have to discuss further but they are informed of all the measures the department is taking and they are being consulted.”

Reporter: Are you able to say when last was a meeting held or when last it was discussed?

Rigoberto Quintana, Acting Administrator of Fisheries: “We had a meeting the 28th of October where we briefed them on what we were doing in terms of what was passed in legislation.”

Reporter: And they had no objections?

Rigoberto Quintana, Acting Administrator of Fisheries: “No, the council had no objections. We had a meeting, a preliminary meeting in June with the producers and that is the discussion we had that they, you know what, we should implement that next season. That would give us time to inform our stakeholders.”

Rigoberto Quintana, Acting Administrator of Fisheries: “I’m not sure. Probably they would have to answer to that. Probably there was some miscommunication but they, even the cooperative, they have a management committee that they meet regularly to discuss those issues.”

Quintana admits that while the changes will affect the fishers, he says true benefits of the new regulations will be seen in the long term.

Rigoberto Quintana, Acting Administrator of Fisheries: “I think the, by increasing the lobster sizes, it gives lobster more chances of reproducing before it is being harvested. We expect that there should be more abundance of stocks in the wild and I think it has to be, I think the international community will say Belize you know what? Give us higher rating and mode access to premium markets Yes the cooperatives have indicated that probably, initially, they might see like a 15% decline in production but eventually that production will stabilise and we will monitor that also.

Reporter: Yeah. The only thing you guys are looking at is the gap size for the escape for the traps? So you’re saying that, at this point, everything else is pretty much set in stone except for that one part of the size?

Rigoberto Quintana, Acting Administrator of Fisheries: “I would say so. As mentioned also, the, this fishers going on social media. They need. There are mechanisms to approach the ministry, the Fisheries Department. They have their leaders at the Fisheries Council and if they have issues then they should bring it on board and then we are to discuss that.

Quintana stated that at the moment the US, which is Belize’s main consumer of lobster, requires lobsters to weight a minimum of five ounces. He also stated that tomorrow the department will be meeting with fishers from Placencia.