The impasse between San Ignacio/Santa Elena Mayor Earl Trapp Junior and the five elected PUP councilors has continued into the New Year. Earlier today the five elected PUP members held a press conference in Belize City where they made several allegations against Trapp. Those include a claim that a number of Trapp’s relatives work at the council and earn a combined total of a quarter-million dollars yearly. But, nepotism wasn’t the only issue the councilor raised, according to Deputy Mayor of the Twin Towns, Mathew Prestone, Mayor Trapp has been refusing to provide financial statements and record surrounding the council’s affairs.

Matthew Preston, Deputy Mayor SI-SE Council: “Like what counselor Neil mentioned stop asking for words from the mayor, ask him to show the black and white because nine months we haven’t seen any official statements. Those statements that we would see are doctored by or are written up by the financial director. We have a letter that we signed and sent to the mayor in may of last year asking to have a meeting with the financial director. All those papers that we see were two bank accounts from Atlantic Bank, one from National Bank of Belize and one from the Saint Martins Credit Union. We were able to find out like I said about the Scotiabank account that’s still active and we have no control or no idea of it what’s the balance of it. The accounting regulation states that it’s the mayor and the town administration and the deputy who should be signing on those accounts so who is signing on that account? So yes we have majority five of us and the opposition has two but we are trying to bring check and balance but like I mentioned earlier in my statement that the Mayor cries when we tried to bring accountability and transparency. How can they be checks and balance when there’s a high level of nepotism? I mentioned all many of the family members. I didn’t mention names but I mentioned their relation to him and positions they have and this is why we’re asking for you guys to ask the mayor for the black and white and ask him the proper questions period we need to make the public know what’s going on in the West.”

Preston also noted that Trapp is acting illegally in refusing to hire a Town Administrator that was chosen by the majority PUP councilors. However, the media question Preston on whether the majority’s choice held the adequate qualifications for the post. This was his response.

Matthew Preston, Deputy Mayor SI-SE Council:  “We had I think between 13 to 15 applicants. We brought it down to six. We had interviews with them. We had a point system and the aforementioned name that the media is putting about saying he’s not qualified. This individual he has over 25 years working in the ministries, in the government. He has accounting training in courses from the World Bank. I’m not sure if this is something the man is afraid of like we said he’s hiding a lot of information but if you notice – and he failed to mention that he was a past counselor, it looks like he wants the previous counselor who was part of the UDP team, who was a UDP Senator, is that what they want? They want control ?  The person that they keep mentioning is not someone who’s ran for office. Yes he works and he supports the PUP but he hasn’t served in any larger capacity than that and for check and balance how can we stop this nepotism? Mismanagement of funds, micromanagement, how, if we put another UDP in here as Town administrator what will happen? Next two years of mismanagement? We are here to serve our town better. We want to excel San Ignacio and Santa Elena beyond where it is today because the people of San Ignacio Town and Santa Elena deserve more.”

Minister of Public Service and PUP Chairman Henry Charles Usher also attended the press conference and spoke to the media about the issue. According to Charles, Trapp is in violation of the town council act and is acting illegally. 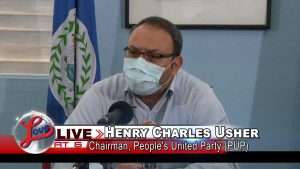 Henry Charles Usher, Chairman, People’s United Party: “I think the problem right now is that the mayor has an issue with democracy. The mayor has an issue in following the Town Council act. From the very first night when he was elected as mayor he said he would operate as a dictator. You guys have the footage you can check that and he has done that consistently for the last nine months. The question you should be asking the mayor is why is he afraid of Harris Grant? What was his new town administrator find when he gets into office and what the mayor has been doing over the years that he has been as mayor. So really the issue or the question at hand it’s not about a dispute between the five town counselors and the mayor it’s about the mayor operating within the confines of the Town Council act and he has not been doing that. So it’s very important that as chairman of the party I’m here to support our five PUP town counselors from Santa Elena San Ignacio and as Belizean citizen I’m concerned by what’s happening in that constituency in the town. Because it’s clear he has a family program going on. How many people does he have hired that are relatives of his in various departments. Those are the questions that need to be asked of me Earl Trapp and I hope that the media asks him that because I understand that he will be meeting with you guys very soon. So the people elected a council. They elected a mayor and they elected a council and they must work together for the best interest of the residents of  Santa Elena and San Ignacio. They are elected these five town Council‘s are elected by the people so when the mayor disrespects them he is disrespecting the people of Santa Elena and San Ignacio.

The five PUP councilors noted that they have since written to the Ministry of Local Government and are awaiting a response on the issue. 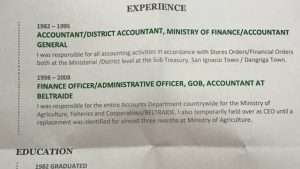