It feels as if it was just yesterday that the death of Laddie Gillett left the nation in complete shock. But, July 14 will mark a year since the 14-year-old was shot and killed by a police officer in Placencia Village. In memory of the slain youth the Justice for Laddie Foundation will be holding a memorial in Placencia on Thursday. The event will begin at 2 o’clock in the afternoon and expected to conclude later in the night. During the event, a memorial garden will be unveiled in Laddie’s memory. Vejea Alvarez reports.

Vejea Alvares, Love FM News: It was the story that angered the entire nation: The killing of 14 year old Laddie Gillett, the youth who died at the hands of a police officer who swore to serve and protect. This Thursday July 14 will mark a year since Laddie was fatally shot once to his back by police Corporal Kareem Martinez on a beach in Placencia while he was making his way home with his friends. In the wake of his senseless killing outrage flooded social media with the hashtag #justiceforladdie sweeping across all platforms and while many may not have kept up with the fight, the Justice for Laddie Foundation has been working hard to keep his memory alive. 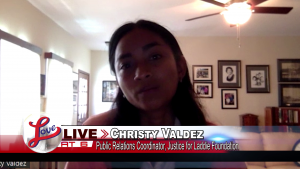 Christy Valdez, Public Relations Coordinator, Justice for Laddie Foundation: “It started off as a, just as an impulse right? But afterwards we, after grieving, mourning, and moving on after the passing of Laddie, we decided that we want to do something positive for the society, for Belize.”

Christy Valdez, Public Relations Coordinator, Justice for Laddie Foundation: “The idea of holding a memorial was to remember, you know? Like I said we don’t want to leave a horrible memory in tune with Laddie. Laddie brought a lot of life and happiness into the lives of the people that were close to him, you know? So, that’s why we decided to go and carry on this event as a positive event that will have a lot of activities and we’ll remember him as being happy and positive.”

Vejea Alvares, Love FM News: This summer, like any other, would have seen Laddie spending quality time with his family and friends on the peninsula. However, this time around, those who loved Laddie will be meeting, at the exact location where the youth spent his last moments, reminiscing on his bright smile and jovial personality.

Christy Valdez, Public Relations Coordinator, Justice for Laddie Foundation: “That’s where most of the sorrow came from, you know. From imagining seeing your slain loved one in that area and being able to return means that we are moving forward. We are moving forward from that hurt, that sorrow, bringing light you know because going into and doing this at that place means that we’re able to move on. We’re able to accept that he’s no longer with us.”

Vejea Alvares, Love FM News: An entire year since Laddie lost his life will soon elapse but for his family, the wounds are still fresh and time has yet to completely heal the gap left in their heavy hearts.

Christy Valdez, Public Relations Coordinator, Justice for Laddie Foundation: “Returning and being able to carry on everything in his name, in his legacy, you know, being that he was a very joyful person, positive person, always having fun, means that we’re able to accept who he was and not what was done to him because what happened was not his fault you know? It was not because he was a troublemaker. He was just having fun, you know, so at the end of the day as a family acceptance has been a one year journey and still is because, of course, it’s sad. I mean, imagine, just remembering what happened. However, how we choose to heal that sadness is with happiness.

Vejea Alvares, Love FM News: The inauguration ceremony for a garden of flowers created in Laddie’s honour will begin at 2 pm behind the Placencia sign. It will be followed by prayers and poetry that will be recited by his friends along with a run for Laddie and to end off the day of dedication, the Justice for Laddie Foundation will be having a “Shine for Laddie” candlelight vigil.

Christy Valdez, Public Relations Coordinator, Justice for Laddie Foundation: “If you can’t join us during the day, join us in the night. You know? So where you can shine a light from wherever you are even if you’re from home we’re glad to know that you joined us in spirit. You can attend from anywhere. You can just use a candle and you know just record it and send it to us and we will be sharing it on social media.”