In an effort to stem the ongoing gang rivalry in the Saint Martin’s area of Belize City, yesterday the Leadership Intervention Unit (LIU) met with the PIV and Backalands gangs. Since the weekend, there has been a flare-up in gun violence between the rivalling groups, claiming the life of one man and leaving four others injured. Today, Commissioner of Police, Chester Williams, stated that the police department is working with the LIU to quell gun violence in the area. Williams also added that the government’s multi-sectoral approach to crime is not an overnight fix but is believed to be working. 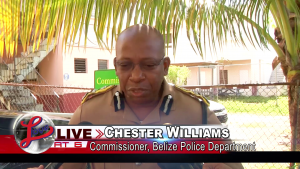 Chester Williams, Belize Police Department: “And now we see that there is a gang flare up in the Martin’s area which has been fairly quiet for quite some time. We have put in place some mechanisms. I have given certain instructions for certain things to be done and yes, the L.I.U. is on the ground along with the conflict officers to see what we can do to bring some resolution to the area. It is not going to be easy, I must say, because we do know how these gang situations go that there is always that tendency that they want to retaliate and we must do what we can to avert such retaliation. But, since the Martin’s, the trio who were shot in the Martin’s, we saw the shooting death of Darren Banks, again in the Martin’s area and we believe that it was a direct retaliation to what took place behind Complex and then we had the other shooting on Vernon St., again we believe was a retaliation. So, we are on the grounds doing what needs to be done. Let me say that at this time we are not contemplating any state of emergency. We’ll see how we can resolve the issue through mediations and interventions. We know we have the multi-sectoral task force on the grounds and we’ll try to use that as a first resort along with police efforts to quell the problem. If on the longer run, we see that the  problem persists after mediation and intervention then we’ll look at a resource to ensure we bring some calm to the St. Martin’s area.”

The Commissioner further explained that based on investigations the police believe that these gang members are targeting anyone who may be connected to their enemies.

Chester Williams, Belize Police Department: “I would not say they are shooting everybody but anyone who they believe is connected to their rivalling group and so, look at, again, at a man like Darren Banks. Yes, we all know Darren Banks’ history. He was once a major player in the gang world but of recent he had not been a player in the gang world. He has, I believe he is now an elder and was living in the Matin’s area but we know that, we know his previous connection and we believe that he was gunned down because of that and these are things that we must try our best to see how we can avoid and let me say that no level of policing can prevent every murder from occurring. I can tell you that the police are on the grounds along with the L.I.U., along with the conflict officers, trying to see what can be done from that standpoint to quell the problem and we cannot expect that the multi sectoral approach that we are employing is going to work overnight. It took us decades to get here and certainly it will take us sometime to be able to reap the complete fruits that we want to reap from the work that is being done by these agencies within the Martin’s area.”

Commissioner Williams also added that he has deployed additional officers in the Saint Martin’s area to strengthen the department’s efforts.