The Department of Youth Services (DYS) has officially completed its National Youth Needs Assessment Survey that was launched last year June. The survey was undertaken by the Ministry of Youth by then Minister Kevin Bernard with the goal of gathering information on the needs of the nation’s youth. And, to assess how the government can provide services and programs to meet those needs. The initiative included conducting in-person surveys of one percent of the youth population which is an estimated six thousand young people ages fourteen to twenty-nine across the country. Director of the DYS, Kevin Cadle spoke about the results of the survey and how the government will be moving forward to address the needs that were identified in the survey. 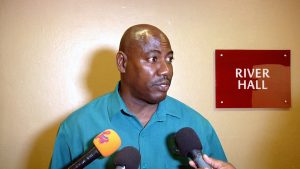 Kevin Cadle, DIrector, Department of Youth Services: “There are several key areas that came out of the survey and one of those key areas has to do with healthcare. We need more access to healthcare, especially psychosocial care. They are saying that one of their major challenges is needing someone to talk to. They also believe that they are not getting the support from their families, which is significant. Another area is education. Young people are saying that they need access to more educational opportunities. They believe that in terms of tertiary education and even the ITVETS that they do not have the support to be able to go there and they would want that opportunity to go to school and that is a significant one again. Another one is the issue of crime and violence and not just crime and violence but they are saying, specifically females, are saying that they are victims of major crimes such as robberies and sexual abuse and that is huge for us to know that we have situations whervey our females especially are being targetted with rape, with sexual abuse, and also being robbed. So we need to look at that and to speak with our colleagues in the Police Department and Home Affairs to see what we can do and to be able to mitigate some of those situations. In the area, another big area is land, housing and land. Young people are saying that they cannot afford the cost to rent homes, to rent rooms and they are saying, especially in the rural areas, that they need access to land. They need land and they need opportunities for land. And finally, another area that is significant is the issue of their socio-economic situation. They believe that they are living in poverty. Most young people are saying that they are not doing pretty well in their lives and they need opportunities to be able to uplift their lives. They are also saying that they need opportunities for job training, skills based training to be able to be better prepared for the world of work so those are very significant.”

While the DYS is the Government agency responsible to facilitate the development and implementation of programs geared at youth needs, Cadle says that addressing the major needs of Belize’s young people cannot be done without a multi ministerial collaboration.

Kevin Cadle, DIrector, Department of Youth Services: “One of the areas with psychosocial support, we’re saying to the Ministry of Health and we do have a very strong relationship with the Minister of Youth, I mean the Minister of Health and we’re saying that what we need to look at seriously is to provide counsellors at the clinics that we have across this country. I think that could really assist in being able to have somewhere that they could walk into a clinic and go there and say you know what, I need to see a counsellor. I want to speak to someone. So that’s one of the first things. The second thing I know is that we have a very strong relationship with the Minister of Lands and I know that they have a land program for first time owners. So we need to continue to work on that and build on that and to probably get the Minister of Lands to come onboard with us to be able to do clinics with the young people to see how he could assist with the young people accessing more land. It has to be multilayered and multifaceted to get the work done. In the area of employment, we need to look significantly in creating entrepreneurship opportunities. This situation whereby we have this old fashioned way of wanting to work for people and not for ourselves is an issue in Belize. Our people need to learn to want to one their own businesses. Our young people are very talented and skilled and they should want to want to own a business for themselves and that is significant for us so we have quite a few programs coming on board to be able to provide services for young people but one of the things we need to push for young people is for them to become more leaders in their own communities and so we’re going to work specifically on the National Youth Councils as well as the National Youth Parliaments to be able to mitigate some of those situations.”

Prime Minister John Briceno attended today’s ceremony and spoke about the importance of investing in the nation’s youth who make up more than forty percent of Belize’s population. 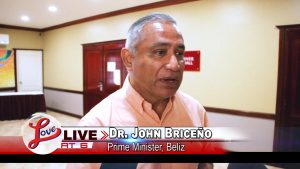 Dr. John Briceño, Prime Minister of Belize: “I think as the minister had been saying, that it’s for the first time we have taken, a government has taken its time out to actually meet with young people and hear them out as opposed to we as adults saying that we have all the answers. We don’t and as I pointed out earlier, young people think differently than us and that happens all the time through generations after generations. We’ve just gone through COVID-19 and COVID-19 has really created a massive crisis, not only for the country financially or the business. We think in those terms but we also tend to forget about young people that for the past two years, young people have been locked up in their homes and that aspect of socialisation is an important part of work, of sorry, of growing up and they have lost out on that so we believe  that we need to see how we can catch up and the Youth’s Department can step in. It’s not only about them going to school but also for them to be able to start to catch up with their socialisation with their friends and that the Youth Department can step in and see how we can provide even more services to be able to give them that support that they need. So unfortunately I couldn’t stay longer but I just felt it was important for me to just come in and to show our support as a government to our young people.”

The survey also included the training of seventy data collectors that played a vital role in collecting data. The total estimated cost of conducting the survey was fifteen thousand dollars.///