On the heels of coming under heavy criticism for their silence by the PSU, the UDP issued a press release today; the subject had nothing to do with the health sector, but rather it had to do with the reopening of schools. The opposition is calling the Ministry of Education indecisive when it comes to the reopening, citing that there were three amendments made within four months as they relate to students going back to school. The opposition is also claiming that the ministry has not given the schools and teachers adequate notice on the reopening date, making them unprepared for Monday, January 10. Additionally, the release notes that the ministry is not preparing in accordance with the easy transmissibility of the Omicron variant and as such they are being callous and irresponsible. With all that said, the opposition is calling on the government to procure vaccination for children between the ages of five and eleven; to continue the vaccination campaign for students over twelve years older; to furnish the schools with sanitization equipment and hygiene kits or a stipend to acquire them. 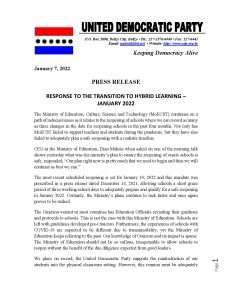