And from flour to eggs and now to the price of the famous Dario’s meat pies- it’s another increase in the price of food. Last night, Dario’s announced it will be increasing the cost of a single meat pie from $1.25 to $1.50 each starting Monday, July 18. Today reporter Vejea Alvarez headed to the bakery to find out more.

Vejea Alvarez, Love FM News: If you’re one of the many Belizeans who enjoy biting into a piping hot Dario’s meat pie like this one, come Monday it’s going to be a bit more pricey. For the past 40 years, the downtown bakery has been producing thousands of pies daily but the cost of doing so has continuously snowballed forcing a .25 cent rise the price consumers of this hearty meal pay to get their fix. Operations manager of Dario’s bakery, Brent Hernandez, explained that since the COVID-19 pandemic, the bakery has been absorbing the increase but has now reached its breaking point. 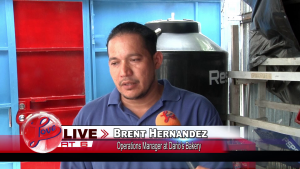 Brent Hernandez, Operations Manager at Dario’s: “Since COVID start, these recent price hikes started since COVID and it was very difficult to say the least because when COVID had hit, mien, we are a business that normally distributes throughout the country. We went to doing less than 200 or 300 meat pies a day. That was like very low for us. The business was struggling and now when that hit, the same time the business was struggling money wasn’t coming in. Nobody was coming in to buy meat pies. Everybody just stayed at home locked up and thing for COVID. Boom! That was the same time all of the prices started to go up a little bit on us. First it started off with the shortening, the butane gas, trickled down to the aluminium foil, trickled down to, now it has reached a point where it is literally every single item on my list, every single item I purchase to help make Dario’s meat pies what Dario’s meat pies is, every single one of them has already raised.”

Vejea Alvarez, Love FM News: And the uptick in the cost of the ingredients and the products used in the business’s everyday operations such as ground beef, flour, shortening, and even aluminium foil has soared.

Brent Hernandez, Operations Manager at Dario’s: “The main one that really hit me the hardest was the aluminium foil which really just surprised me. Aluminium foil, we normally buy the industrial size aluminium foil which is 18 inches wide and one of those by the roll before COVID-19 used to be like $86 and something cents. Less than $90 per roll. Last year around October/November they didn’t have any more. It went scarce then February or March this year it came back again but then the price now for the aluminium foil went from $86 to $186. Literally put $100 more mien. That happened from since February/March so like I said, things like those affect us directly because then that is a direct price increase on something I have to purchase so that I can distribute the meat pies and then where does that come from? That comes from me. That comes from what I would normally be left with.”

Vejea Alvarez, Love FM News: Despite the move angering many of his loyal customers, Hernandez says he believes they will understand the tough decision that was the only alternative besides watering down its recipe to cut costs.

Brent Hernandez, Operations Manager at Dario’s: “It’s basically reached a point now where I have to be like, hey, if we don’t try to do something now, we will go down you know and the reason why I say do something now is because they have two options where I see solutions to the problem, no? Number one, I could have always adapted and altered the recipe but what does that mean? That will mean that Dario’s Meat Pies will not be Dario’s Meat Pies. The reason why my customers are loyal to my brand name is because they know the standard that we upkeep. My pa always said “Son, make sure the meat pies taste just as good as the day before or better, never worse.” And so that is what we are trying to live up to.”

Vejea Alvarez, Love FM News: According to Hernandez, a major part of sticking true to the values that were instilled by founder Dario Hernandez is centering their business around affordability for school children. He says the current price will remain the same for street vendors and schools in Belize City

Brent Hernandez, Operations Manager at Dario’s: “Dario’s Bakery, we have always been and will always be for the children. Meat pies are for the children. That is the culture. That is the legacy that my daddy left and so even though we are going through difficult times right now, my sister, my mom and I, we are still trying to consider our customers, mainly like the poorer class and the children more and so what, the decision we made was to let us try to balance the scales a little bit. What we are doing is that we are leaving the price the same way for the schools and we are leaving the price the same way for the vendors them. It’s just here at the doors and the home delivery systems. That’s where you will really feel the price difference. No? And I’m hoping this will suffice so that it could stay like this.”