Inflation continues to increase and Belizeans across the country have been feeling the pinch of the rising cost of living. Recently released data from the Statistical Institute of Belize (SIB)shows that for March 2022, the country experienced overall inflation of 5.7 percent. The cost of fuel, food, and liquefied petroleum gas was most affected. Transportation cost shot up by almost twenty percent from a year ago, while basic food items were up by six percent. The cost of certain food items also soared when compared to the same time last year. Pigtail went up by seventy percent, vegetable oil went up thirty-six percent, Irish potatoes went up by thirty-five percent, and tomatoes skyrocketed by ninety-one percent. Generally, the first three months of 2022 showed inflation of four point eight percent when compared to 2021, a time when Financial Secretary Joseph Waight says the government was forced to tighten its belt. According to Waight, the cut in salaries for public officers and the restructuring of GOB’s super bond helped to cushion the blow of the COVID-19 pandemic. Waight was a guest speaker at today’s 2nd Annual Gian Gandhi Memorial Lecture 2022. 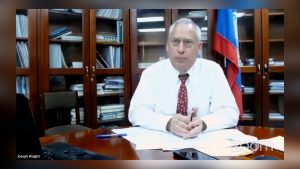 Joseph Waight, Financial Secretary: “What we had to do was essentially tighten our belt, tighten our belts, the government that is,  by cutting its expenditure as far back as is humanly possible. That included among other things a temporary reduction in wages and salaries painful as it was but it was required, also a significant cutback in our operating expenditures. That helped to stabilize things but that was not the only action. We accessed through our partners additional financing to support our operations particularly in capital programs and then we embarked on I think what turned out to be a pioneering the effort at debt restructuring and debt restructuring resulted in what we referred to as a new blue bond. Essentially what that was was borrowing fresh new money to pay off old money but on substantially better rates. We had the superbond in front of us, it was a figure of 550 million U.S. dollars. It was in distress, we were able through a novel program with our international conservation partner called the TNC we were able to develop new money at $265 million to buy back the Super Bond at a sharp discount of 45%. So we borrowed money, paid off the Super Bond, borrowed money on far better terms also with an obligation that we would spend some of the money government with a gauge in our with our international environmental partners to engage in a long term marine conservation program. It’s the first year of the program we have met our first level of targets it’s novel, it’s an example to the rest of the world and it has given us much needed debt relief. In fact our debt to the GDP ratio I told you at the beginning was 130% of GDP this effort shaved off at least 20 points we are down now two about 112 % of GDP and our program is to take it below 100 and down to more comfortable levels of around 90% or so in two years  time.”

While it may be difficult for Belizeans to believe, Waight says that the country’s economy is slowly rebounding. However, when compared to pre-pandemic levels, the economy is still not where it needs to be. Waight says the government needs to continue to practice fiscal prudence.

Joseph Waight, Financial Secretary: “We are pleased to report that in 2021 our rebound was more of a ‘V’ shape rather than an ‘L’ shape or a ‘U’ shape driven by the economy that reopened, the vaccination program, COVID had subsided a little bit and pleased to say that in the first few quarters our GDP has rebounded to almost 8% of GDP. Which is a significant improvement but as the other side shows on the right-hand side we are not back to where we were before we’re still about 9% below where we were in 2019. So yes a big improvement, we are not where we were but we are on the correct trajectory but we have to maintain it. As you can see the government fiscal performance has improved again. Remember it crashed to almost  -8% of GDP period last year we posted a 1.5% of GDP primary surplus period now what is the primary surplus? The primary surplus is the measure of our level of savings in the system and our capacity to pay debt. The primary surplus has to be in a positive territory , it should really be around 3 or 4% but 2% is acceptable and the 2% is what we are targeting for this year and in the years to come. In the medium term. On the right hand side of the slide you can see the composition of the debt and with the taxes our taxes have rebounded as well but again remember the economy is so fragile and the government tax system we’re trying to improve it so that it’s more equitable and rather than raise the level of taxes broaden the base and to try to collect what is owed and also spend it wisely so still we are in fiscal constraints and we have to be very careful how we spend because the government has to generate that savings in order to pay its debt.”

The Financial Secretary says the country’s overall economic activity is beginning to gain momentum when comparing the first two months of the last three years. 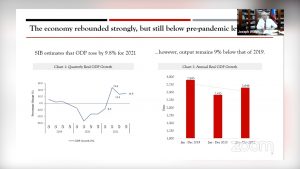