The Swing Bridge – it’s one of the defining mainstays of Belize City that has connected the municipality’s north and south sides since Belize was a colony under the British Empire. But, the decades-old landmark may soon be replaced due to severe damage to its infrastructure. As Love News found out, works are in the pipeline to determine the fate of this historical landmark. Reporter Vejea Alvarez has the story.

Vejea Alvarez, Love FM News:  I’m below the Swing Bridge in the heart of downtown Belize City. This structure has stood here for 99 years but now, it’s at risk of being replaced because as you can see, the supporting structure of the bridge is badly corroded and according to a recent inspection report done by Young’s Engineering Consultancy Ltd. the bridge is in very poor structural condition due to corrosion and subsequent degradation of its load carrying elements which has prompted the Belize City Council to look to replace this landmark before it comes crashing down. On Monday, representatives from the Belize CIty Council, the Ministry of Economic Development and the Central American Bank  for Economic Integration, CABEI, conducted a walkthrough on the platform as part of the Briceño administration’s venture to replace or repair the bridge. According to CEO in the Ministry of Economic Development, Dr. Osmond Martinez, GOB needs to firstly conduct a $200,000 feasibility study on the landmark to assess how much funds will be needed for the project.

Dr. Osmond Martinez, CEO, Ministry of Economic Development: “We are working with CABEI to do a non-refundable feasibility study. Why? Because once we have a feasibility study then we will understand the amount of money that is needed, the type of infrastructure. At the same time we will understand, we will look where we can access this finance, whether it would be grants, concessionary loans, or a loan.”

Vejea Alvarez, Love FM News:  Until that feasibility study is complete, according to the engineers at Young’s, it is simply not possible to rule out the possibility that the bridge is at risk of at least partial collapse under loading and the most obvious course of action would be to replace the bridge in its entirety, something that Belize City Mayor, Bernard Wagner, agrees with but says will be difficult due to the need for its replacement to be rotational. 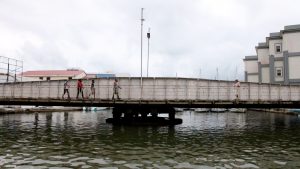 Mayor Bernard Wagner, Belize City Council: “Well our request is to really replace the bridge right. We think that bridge has served its time but we want to retain the ability to be able to have the fisherfolk traverse the river in the event of a hurricane and that they find a safe haven along the river. As you know, that is one of the key areas when hurricanes pose a threat to the city, the fisherfolks would normally make their way up the river and so we want to retain that ability to be able to facilitate those fisherfolks.”

Vejea Alvarez, Love FM News:  But the most difficult aspect of replacing this mainstay of Belize City is the historical significance it holds. To remedy that issue, Mayor Wagner says that it is his hope that some of its historical aspects can be retained and preserved.

Mayor Bernard Wagner, Belize City Council: “We know the historical nature of the bridge and we want to at least be able to retain that bridge, that’s a huge landmark for Belize. This coming year it will be 100 years old so it is one of the only bridges that currently has the mechanism to swing the bridge manually and so its historical feature right there, we want to see how we could integrate that into a sort of historical landmark for Belize somewhere down the road.”

Vejea Alvarez, Love FM News:  All in all, Mayor Wagner says that the purpose of doing away with this landmark is to ensure the protection of city residents who traverse the brittle bridge that may come crashing down at any minute.

Mayor Bernard Wagner, Belize City Council:  “This is one of our key core areas that we want to see come to fruition. The bridge really poses a danger to our residents in the city. Each and every day that that bridge is traversed with the weight load it poses a clear and present danger and so we want to ensure that we contribute to alleviating that risk.”

Vejea Alvarez, Love FM News: The project will be undertaken by the Ministry of Infrastructure Development, the Ministry of Economic Development and the Belize City Council. However, it is yet to be confirmed if the historical landmark will be replaced or repaired. Reporting for Love News, I am Vejea Alvarez.