The University of Belize Environmental Group will also be following the La Ruta Maya Belize River Challenge over the long weekend. However, they will not be challenging the currents of the river. The club will be tackling the environmental challenge of pollution which is visibly seen along the route. Love News, via Zoom, spoke with members of the group. Caisha Fermin gave an insight on the preparations for the event.

Caisha Fermin, UB ENvironmental Club: “This morning we were going around gathering some supplies. So we collaborated with some NGOs like TASA, FCD*, GIZ, and The Department of the Environment and we got some tokens that we are going to use as giveaways. So alongside our cleanup that we’re going to do while we follow the race, we’re going to be asking questions and keeping the attention of the young people and the older folks by giving out, away, anklets, posters, little tokens like water bottles and flash drives and in exchange they would answer questions of what they know about the environment or they would stop by to learn a little bit about the waterways and how it works and why it’s important to do a cleanup at an event like La Ruta Maya.”

Dr. Pio Saqui, Director of the UB Environmental Club, explained how the club will be engaging with the community during cleanup campaign. He further stated that the club always encourages the public to participate in the club’s activities so they can be more aware about the environments. 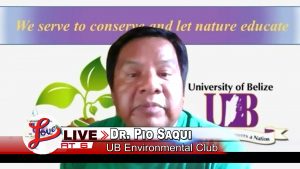 Dr. Pio Saqui, UB Environmental Club: “Tomorrow morning we will be there for the opening ceremony. We will do the clean up campaign and we will obviously be talking to people. So we’re sharing information on the environment. The Belize River is a very big river that really holds about close to, just a little bit over 50% of the entire population of the entire country of Belize and certainly it provides great service. So this is something that we really want share with the public, with our students, with everyone who is using the river and in particular not just for the racing and all that but for their life support system, the fishing and the watering and all of that, that this is something important that whatever we do as a people, that’s something we want to know has an impact on whatever happens to the river itself. So this is something we want to share. So what we’ll do is we will do the cleanup and then we’ll go ahead of the race to wherever the race is ending for the day and we’ll set up a booth there and we’ll spend the time, whatever time we get there, you know, midmorning to about 3 or 4 o’clock in the afternoon, where our students will be engaging in cleanup activities but as well we will have a booth set up where we will be having information sharing. We will have posters. We have these games we’re going to play so we’ll have these real kind of nice gifts that we’re giving away that other agencies have donated for us.”

The club is inviting spectators of the race to join them in their cleanup activities as they follow the paddlers through the course of the weekend.