Leader of the Opposition, Moses Shyne Barrow, has announced the appointment of two new UDP Senators. Former Government Minister, Beverly Williams and Antonio Herrera from Corozal Southeast are now slated to be sworn in at the next Sitting of the Senate. Both Williams and Herrera will be replacing Senators Darrell Bradley and Sheena Pitts. The advisory came from the Office of the Leader of the Opposition just after five o’clock this evening in which Barrow thanked Bradley and Pitts for their service. Love News understands that Bradley has been asked to serve as the Shadow Minister of Foreign Affairs & Foreign Trade as well as Chair of Special Committees on the Central Executive. Meanwhile, Senator Pitts has been asked to serve as Shadow Attorney General and Chair of Policy and Planning on the Central Executive. 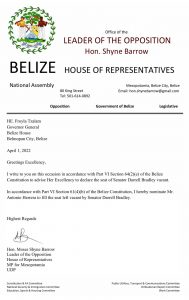