On Friday, the Briceno Administration introduced a bill to repeal the Trade Licensing Act to allow for the implementation of a reformed trade license regime. The draft piece of legislation, which has only been tabled for its first reading, will expand the list of working professionals who will be required to obtain a trade license to do business. Over the weekend, details of the bill made their rounds on social media and attracted a slew of complaints and criticisms from the public. Reporter Vejea Alvarez reports.

Vejea Alvares, Love FM News:: If you’re a disc jockey, artist, clown, taxi operator, contactor, or fruit vendor, come January 2023 you may be required to pay a trade licensing fee. That’s if the Government’s Trade Licence Bill of 2022 is approved in the House of Representatives and the Senate. The draft piece of legislation, according to Minister of Labour & Local Government Oscar Requeña, seeks to regulate businesses in cities, towns and villages. 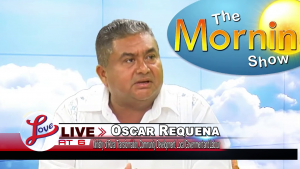 Oscar Requeña, Ministry of Rural Transformation, Community Development, Local Government and Labour: “The new trade licence bill is certainly a very important piece of legislation that really seeks to regulate and to safeguard businesses both in the rural areas as well as in the municipalities. I think it’s very important that we note that to a great extent, businesses in the rural areas have never been regulated and that is important because we need to ensure that at the end of the day that business is done in a regulated manner and that it protects the well being and the safety of the population.

Vejea Alvares, Love FM News: At the moment trade licence fees are non-standard and are determined by leaders of individual municipalities. The changes to the Belize Trade Licensing Act, according to Ishmael Quiros, Director of the Economic Development Council will allow for businesses to pay a standard rate. 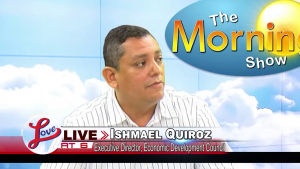 Ishmael Quiros, Executive Director, Economic Development Council: “What this legislation proposes is a standard methodology right across the country for assessing how much businesses by category, within different zones, within municipalities and villages would pay and what it also proposes is to really publish this and to lock it in law so that there’s that stability, consistency year on year for businesses to know what exactly they will pay.”

Vejea Alvares, Love FM News: While businesses will pay a standard rate for a three year period, professionals in the Music, Construction, E-business industries will pay a fee based on an evaluation done by the respective district Trade Licencing Boards. For example, G.O.B. proposes to charge international performers and entertainers up to $500 per day while Belizean entertainers like musicians and DJs will have to pay a maximum of $200 per day. A fee that many local artists, who took to social media to voice their concerns, are outraged over.

Ishmael Quiros, Executive Director, Economic Development Council: “For the entertainment sector and small, micro business sector we definitely need to take those considerations into account and adjust accordingly as prescribed by the technical persons.”

Vejea Alvares, Love FM News: Minister of Culture Francis Fonseca, also responded to the negative criticism that has been pouring out of the music industry. Fonseca wrote on his Facebook page: “We talk a lot in Belize about the need for sustainable, meaningful, economic development. To achieve this requires a properly structured economy which protects and respects legitimate investments and generates fair, reasonable revenue for the Government. We cannot have an economy in which 50% of the participants follow the rules, register their businesses and pay licence fees while the other 50% operate completely outside of the formal economy while remaining in direct competition to the first 50%.” and that sustainable economic development, according to Minister of Human Development Dolores Balderamos-Garcia will be beneficial to rural communities that are currently not collecting trade licensing fees.

Dolores Balderamos Garcia, Minister, Humans Development, Families and Indigeous people affairs. “We’re putting in a regime where people can benefit but at the same time, you pay your fair share for the development of your community. Ladyville is a very huge community. It’s bigger than Punta Gorda. There are some big businesses. I don’t want to call names, you know, but there are banks. There are supermarkets, many of them aren’t paying anything right now. They will begin to pay their fair share with the Trade Licensing Bill.

Vejea Alvares, Love FM News: But while rural communities will be able to collect Trade Licensing fees from establishments, the place of business will have to be larger than 600 sq. ft. to be required to pay.

Oscar Requeña, Ministry of Rural Transformation, Community Development, Local Government and Labour: “In the Bill, for the rural area, it says anything that is less than 600 sq. ft. They are not going to be eligible for any trade licence so they will not be paying. It has to be, I think it is 600 sq. ft. It’s going to be $150 a year. Anything from 600 sq. ft, to 1000 sq. ft. is $250 a year. So all those small businesses are going to be exempted. You know, from the Trade licence.”

Vejea Alvares, Love FM News: Persons classified as E-commerce operators will be required to pay up to $600 per year. A move that has angered many business owners who utilise the internet to buy, sell, and trade. However, Quiros says that the change was driven by the need  to modernise the country’s laws and to ease the way E-commerce operators obtain proof of sales.

Ishmael Quiros, Executive Director, Economic Development Council: “A  lot of the times the people buying and selling things on, well selling things online go to the bank and then the bank requires that they have confirmation as to their source of income and then they have approached the municipalities to request a trade licence because they need it to be able to bank, to get their legitimate money, you know, through and so there’s that benefit now that they will be able to now automatically have a trade licence provided that they satisfy the application process and do that. So that’s one aspect of the regulation that the banking system will demand it and so it’s something that they will need. Other than that it’s hard to police anybody operating online and especially transacting with digital cash. But it’s definitely an area where we’ve needed to step up, given the rise in E-commerce and needing to modernise our legislation.

Vejea Alvarez, Love FM News:  The Bill now proceeds to the House Committee where any changes or amendments deemed necessary can be made before it returns to the House of Representatives for a second and this reading. Minister Requeña echoes that recommendations from the relevant stakeholders and directions will be taken into account. Reporting  for Love News, I am Vejea Alvares.

As you heard, the trade licensing legislation was in the making for the past years. That would mean it began under the previous UDP Government. And while that is so, the UDP today is setting the record straight. In a late evening press release, the UDP says that (quote) “This Black Friday Bill was written by technocrats years ago, in an exercise that started as far back as 2014, but vehemently rejected by the UDP Cabinet. The position of the UDP then as is the position now is no bill that seeks to punish the entrepreneurial spirit of the least fortunate among us should be entertained by those seeking to improve lives.” (end of quote)