The United Democratic Party is saying that Police Commissioner Chester Williams must go. The call was made today during a press conference at the party’s headquarters on Youth for the Future Drive by the UDP’s Shadow Minister of National Security and Chairman, Senator Michael Peyrefitte. Speaking on the crime situation, Senator Peyrefitte repeated his calls for the Minister of Home Affairs Kareem Musa, and his CEO Kevin Arthurs to resign. But this time he added Williams to his list. According to Peyrefitte, the Belize Police Department needs a massive shakeup which should result in a new commissioner. Senator Peyrefitte also says that the department’s leadership is “top-heavy” and that Belize is experiencing “a sense of lawlessness”. 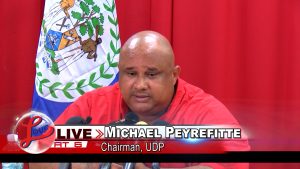 Michael Peyrefitte, UDP Chairman: “This man has come from far. He has done well for himself, he’s a hard worker, he’s tenacious but people he is not getting the job done. The Commissioner of Police needs to also consider and look within himself and think whether or not he needs to step aside and give way to some new blood. He’s not cutting it. In my view the Police Department needs a new commissioner, it needs to be shaken up. He has never claimed the job was easy, he has never claimed it could be done in the blink of an eye he has never claimed that but let’s be frank it’s not working. The morale is at an all time low and we’re not getting results from the Police Department. You know we are in basketball playoff time you know and you have the owners of a team which would be the people in this case, you have the general manager who would be the minister and then you have the head coach of a team that team being the Police Department and when you need to shake up things sometimes the head coach has to go. You can’t get rid of the people, you can’t get rid of the owner, you can’t fire the whole team you need to have a shaking up of the Police Department’s leadership and it’s not easy for me to say that not like the other two. It’s not easy for me to say that because Commissioner Williams is a hard worker if nothing else but he’s not getting it done. We saw yesterday Security Services Commission approved among other things three deputy commissioners of police so we have three now; one for legal affairs, one for legal for administration, and one for operations. We have 10 assistant commissioners of police, ten. The department is top-heavy and nobody is feeling that level of leadership from the Police Department changes have to be made this is not personal but it’s not working.”