Sir Barry Bowen’s grave was desecrated late last week in western Belize. Police in San Ignacio Town are still trying to ascertain the motive for such a move. Love News understands that the incident occurred on Thursday night and was observed by persons who were preparing another grave site. The matter was reported to the authorities and upon investigation they found that nothing of value had been placed in the coffin. Former Senator, Sir Barry Bowen passed away in February 2010. 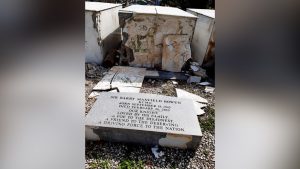