Tourism Minister Anthony Mahler is today responding to comments made by the Federation of Cruise Tourism Associations of Belize,FECTAB, during a press conference last week. FECTAB’s President David Almendarez, bitterly complained that the government is looking to expand cruise ship tourism to the south. This, Almendarez says, will take economic opportunities from Belize City stakeholders. FECTAB’s claims were based on the April 28th, Cabinet Brief press statement. In that statement, the government announced that approval was granted by Cabinet for the Ministry of Tourism and Diaspora Relations to initiate a formal process of review of the current definitive agreement between the government and Belize Island Holdings Limited to improve and facilitate the future growth and development of cruise tourism in Southern Belize. Minister Mahler reacted to FECTAB’s concerns.

Hon. Anthony Mahler, Minister of Tourism: “FECTAB has a right to express themselves but they have to get the facts. They don’t know anything,  absolutely anything. The issue with harvest key is that the numbers are capped at a certain level. We believe that there is more capacity on the island. We’ve been talking to Norwegian but they don’t even know that we are in negotiations for if we expand the numbers down South that we are negotiating with Norwegian to put ships in Belize city back that is the only way we’re going to do it. They get up make a lot of noise I guess that’s how they get their fix for the day but they have no substance to their position. They have no information. They have nothing. I’m working hard to bring  more ships to Belize City and even in the discussion with Norwegian is to put more calls in Belize but Belize City as well.”

Minister Mahler says that consultations have been had and questioned FECTAB’s legitimacy. 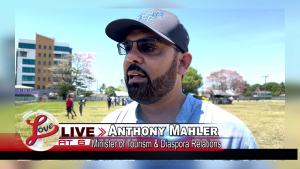 Hon. Anthony Mahler, Minister of Tourism: “We consult everybody. You have to consult people in the Planencia area how much more we want to bring on that but these things are very premature. There is no basis for FECTAB , which is almost a different organization, to be jumping up every time they want to get some level of credibility they jump up and fight. Why do we have to fight? Fight for absolutely nothing. Tell me to show their membership, tell me when last they had a meeting, all these things. If there is going to be a legitimate organization then be a legitimate organization.”

Reporter: Political parties are not even registered so I’m not even sure that you can be making that criticism.

Hon. Anthony Mahler, Minister of Tourism: “They have no basis for being antagonistic. They have no basis for wanting a fight. They have absolutely no basis, none, zero. My position is that we consult stakeholders continuously. We have meetings with them, we’ve had open forums with the cruise lines via Zoom, everybody can come in and participate and we will continue to do so.”

Mahler went on to say that businesses and entrepreneurs in the southern district also deserve a piece of the pie.

Hon. Anthony Mahler, Minister of Tourism: “We have Belizeans down South too and they too deserve to earn a living. Cruise tourism is not designated for  Belize City solely but I believe that it creates opportunities for people in Belize City to be entrepreneurs, to be creative and to invest in small and micro businesses and we will continue to focus on that. In fact we’re having discussions with other cruise lines but smaller ships that would navigate through our waters for a couple days and go multiple destinations and Belize and so that is on board. We’re talking to Carnival but they’re saying that -. we’re talking to Carnival, Royal Caribbean Norwegian all of them MSC  and host of others for more ships to come to the Belize district but all the major cruise lines are saying that as the ships become larger the tendering port will not be the best situation for them and so our priority should be to complete a docking facility wherever in the Belize district.”