Belize and Mexico are currently co-hosting the 37th Exercise Tradewinds, a multi-nation initiative sponsored by the US Southern Command. The two-week event features regional and international military units engaging in operations designed to enhance responsiveness to security threats and natural disasters. Belize’s participation as a host nation is a testament to the commitment to develop operational and leadership skills and discipline, and to strengthen military partnerships. Love News spoke to Lieutenant (loo-ten-nant or lef-ten-nant) Steven Hale, Contingent Commander for the Canadian Armed Forces. 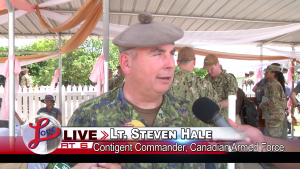 Lt. Steven Hale, Contingent Commander, Canadian Armed Forces: “This organisation enables us to partner with the Caribbean nations, train a number of officers regionally to ensure that they’re able to conduct their own operational planning and preparation in the event of a crisis or a disaster in the region. So we use our methodologies and bring them to the Caribbean basin and hopefully create interoperability in case we are ever needed to be called upon to work together as a team. For this specific Tradewinds, Canada is contributing the mentors for the Caribbean task force. Also, we are bringing in the HMCS Harry the Wolf, which is one of our newest vessels in Canada, and they’ll be working with the maritime track and woking on maritime interoperability and interdiction at sea and we also have our Canadian dive team back on the exercise this year after a year off and they’ll be working with the dive training track to increase the capabilities of all divers in the basin. For Canada, the one thing that we bring back every year is we bring back an increased awareness amongst our own officers and NCOs as to what resources exist in the region so that we know that when we’re doing our planning to respond to a hurricane or a disaster, what we’re going to meet when we get into the region and that’s very important for us to know who our friends and allies are and, more importantly,  I would call it increasing the size of our rolodex so that if something does happen we can reach down and immediately grab somebody on what’s that most favourite program? WhatsApp and have a chat with them about what we need before we arrive.”