The second load motion passed today was for a twenty-five million US dollar loan to implement a Climate Resilient and Sustainable Agriculture Project. The project will provide funding for support to agriculture producers while also supporting more established commercial farmers and farmer associations. The Opposition supported the bill but Leader Moses “Shyne” Barrow expressed reservations. 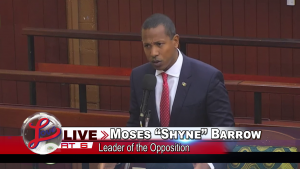 Moses “Shyne” Barrow, Leader of the Opposition:  “We the opposition support this assistance to our farmers to help them with their technical training and transitioning small farmers to commercial status. The reservation that we do have is as I’ve been traveling around the country San Antonio, San Andreas, Chan Chen, San Estevan I was in your constituency Prime Minister this week – there is a concern by farmers that when these monies are borrowed that the distribution is politicized. And you know I respect the member from Orange Walk South and I hope that I could sit down with him and bring these concerns to his attention because while we support getting these necessary monies for our farmers it cannot be PUP farmers or UDP farmers it has to be for the farmers.”

Julius Espat, Minister of Infrastructure Development and Housing: “I remember Petrocaribe, $700 million and we still don’t know where the money went. The people have not felt the money as it and you talk about equitable and efficient and a whole lot of rhetoric when your government was in power you had access to $700 million –”

Moses “Shyne” Barrow, Leader of the Opposition: “Madam Speaker what does it have to do with the motion? I didn’t say anything about Petro caribe a equitable nothing.”

Madam Speaker: “Remember when we stand on a point of order I’ve also reduced what I’ve asked for I’m not asking you to name the number of the standing order but just the essence of what that point of order is that’s all I ask. What is your point of order?”

Moses “Shyne” Barrow, Leader of the Opposition: “My point of order is relevance Madam Speaker.”

Julius Espat, Minister of Infrastructure Development and Housing “I don’t understand his relevance but I’m just reminding him because he says that he is hoping that we are equitable in when how we spend our money and I believe we have been fair, equitable and efficient in how this government is spending its money. Maybe to a fault as the Prime Minister says and I’m reminding him of one incident, one situation where $700 million was borrowed and we still have to pay it and there is no report, there is no auditing, but we know of all the political issues and political spending that was done with it and so I’m just reminding you it’s not good to be hypocritical in this house. It’s important to speak the truth. You weren’t in cabinet but your papi was. You want to bury him you said? No I’m just repeating what did you say Sir? So it’s good for me to remind him Madam Speaker because sometimes he’s missing the point and if he does I will constantly remind him.” 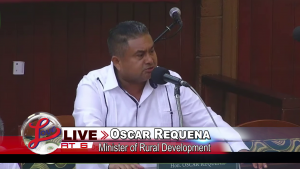 Oscar Requena, Minister of Rural Development: “I sat here and listened to the member from the opposition complain about this loan motion and really and truly Madam Speaker I want to put on record that he should be the last one to be speaking against supporting such a very important motion when in fact the United Democratic Party and his side have the worst record Madam Speaker when it comes to supporting agriculture.”

Madam Speaker: “The record will show that you did support the motion.”

Oscar Requena, Minister of Rural Development: “Leader of the Opposition I would advise that you sit and listen and learn something.” 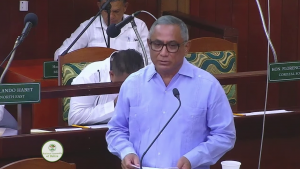 John Briceno, Prime Minister of Belize: “and speaking of epiphanies I think the one who got an epiphany today is the Leader of the Opposition finally realizing that we need to support our agriculture sector. We need to support our farmers that’s why you got the epiphany. Listen to me I am also a farmer you know? I am a keen farmer. I have a cattle ranch, I invest my money on the soil. I invest my money in the soil and sweat under the sun. So you are the one. How many hours have you spent working under the sun toiling the soil? You don’t know about those things you will catch a heat stroke if you come out under the sun and try to work in the farm.”