Questions remain about the weekend shooting incident in which Belize City Deputy Mayor Micah Goodin was involved. He insists that he was trying to prevent a murder after two men were having a dispute. However, Goodin has not been charged. Today, the Opposition, the UDP has called for police to move swiftly to charge him. Party Chairman, Senator Michael Peyrefitte says that the Police Department is showing favoritism in a situation where ordinary citizens who have had the book thrown at them. 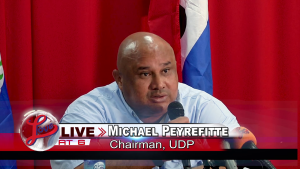 Michael Peyrefitte, Chairman, UDP: “You have a report being made that shots were fired from his vehicle, from the Deputy Mayor’s vehicle and it is without question that shots were fired back at that vehicle because there are bullet holes in the vehicle now, you don’t want to prejudge him? But the Government was quick to prejudge the public officer that the Prime Minister called about the CITES plant. They prejudged him quickly and put him on suspension quick, quick, quick and nobody has moved to say suspend him? Reprimand him in any way so far? Sir it is wrong. Hypocrisy. People have been charged for less than what Micah Goodin finds himself in today. You have shots coming from a vehicle. A report is made. Tyreek James was in Micah Goodin’s vehicle and he has been charged with discharging a firearm in public. Under the law, Micah Goodin being the owner and controller of that vehicle is responsible for what comes from that vehicle. If I am driving in a vehicle and I give somebody a ride and the police see me throw a gun out that vehicle, I am responsible because I am the owner and the controller of that vehicle until it can be disproved by me that it wasn’t me who threw it out the window. So when shots come from your vehicle, as is reported, you are responsible and you are supposed to be charged because that has the markings of a joint enterprise.”

Among the questions centered on this case is whether Goodin, like one of the other people involved in the incident, spent his mandatory 48 hours in detention. Senator Peyrefitte spoke on the matter. 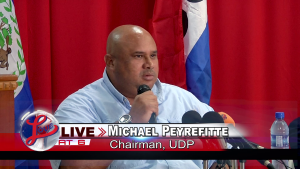 Michael Peyrefitte, Chairman, UDP: “There is no evidence that he was even detained and not because you’re at the police station means you’re detained, you know? Detained means they ‘put yo dah piss house! Dah bak! Downstairs!! Detained!’ Right and it’s in the diary. There’s no evidence of any diary that have him being detained or anything like that. When you’re detained the EDU and the officer in charge will have record of your detention. There is no such record of that from any police station in this country. So when was he detained? Detained by which officer? There is nothing to say that at all. He may have been at the police station but certainly not detained and the evidence has shown that indeed that he was on his phone. That was a strange detention to me. Strange detention, so he was never detained and I don’t know why the Police Commissioner would get behind that.

And this incident is somewhat reminiscent of another involving former Deputy Mayor Dean Samuels back in 2007. The stark difference between the Goodin incident and this one is that Samuels was charged and the case went to court. Peyrefitte was the one who represented Samuels in the case and discussed that difference.

Michael Peyrefitte, Chairman, UDP: “Back then, I represented that person in a private capacity but he was charged. He went to the court and the only way he got off of that charge was because the virtual complainant came and said he didn’t want to proceed and you can ask that former Councillor what I told him when we went to the police station that day. I told him “You gwen dah jail. You gwen dah jail because under the law, the Magistrate cannot give you bail for this so you betta pray that the virtual complainant shows up in court and withdraws the charges.” Now, there are no changes except the culture, Dale. If the culture of the police department is that it doesn’t matter who you are you will be charged and you will be prosecuted then that’s all the change you need. I don’t believe that with the current leadership in the Police Department, like I said it’s not personal but the current leadership in the Police Department doesn’t give you the vibe that they will function independently and they will do what they need to do. All that needs to happen, you know, is that the police officers, I’m talking specifically about the people who deal with the public everyday from, mostly from inspector down. Let them, know that whenever there are reports, whenever there are instances, you will deal with it however you would with any other normal case.

As we noted, Goodin is out free without charge and did not spend the required time in detention. In 2007, Samuels had spent eight hours in detention. He was originally charged with aggravated assault, discharging a firearm in public, using threatening behavior, driving without due care and attention, driving with alcohol blood level over the prescribed limit, and possession of a firearm while under the influence of alcohol. The aggravated assault and the use of threatening behavior charges were later dropped.