While the UDP was heaping criticism on the Police Department for the culture of favoritism, the former Police Minister reiterated the Opposition’s call for the Prime Minister to fire the Police Minister Kareem Musa, his CEO Kevin Arthurs and the Police Commissioner Chester Williams. Senator Peyrefitte was also asked about his party’s position on Rene Montero, the former Minister of Works, who is wanted by the authorities. Our newsroom asked whether the party’s energy on the Micah Goodin situation should be the same for Montero. Here’s how the party chairman responded.

Dale McDougal, Love FM News: “How would you respond to the criticism that perhaps the party is expending energy on this issue when the same kind of energy is not expended on the Rene Montero case who still has not turned himself in? 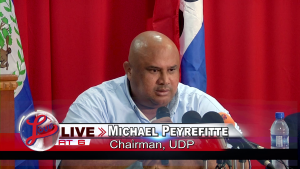 Michael Peyrefitte, Chairman, UDP: “What? How is that the same thing? How is that the same? So then, if they believe that they have a charge against Minister Motero, go for him. Go for him. Nobody is saying you shouldn’t go for Rene. If you believe you have a charge, Go for him and if you believe he’s hiding, go and find him or send family court for him. They can find people good. Or send somebody. Nobody is saying that if you have a charge then you should not be changed. You, the police department, if you have a charge for anybody, go and get that person and let that person have his or her day in court and everybody will be treated with the presumption of innocence, everybody until proven guilty. But what I’m saying is this. This is the difference though Dale. Julius Espat jumped up, said Rene Montero needs to be charged with some dubious malfeasance in office type thing. Man and they prepare charges in record time so how come shots are being fired in the city and you don’t even know if Micah Goodin was detained. And that is the difference? How can you be so quick with one but not quick with the others? All we are saying is this, if you can quickly charge Mr TIllett, Ms James, and other people. How arent you quick to charge Micah Goodin? Charge everybody or you don’t charge anybody. But you cannot show preference to certain people and the police department showing preference to people is a problem with the culture in the department.”

A red notice by Interpol has been released and Commissioner Williams told us two weeks ago that Montero is in the U.S. seeking medical attention and that his family has committed that Montero will turn himself in upon his return to the country.