Chairman of the United Democratic Party, Michael Peyrefitte says that Police Commissioner Chester Williams wants to be a politician under the PUP’s blue banner. Peyreffite accused the Commissioner of being too political in his post and cuddling with the party in power. As viewers may know, both men have been in a back and forth for the past few weeks following a press conference held by the UDP. During that conference, the Peyrefitte called for Williams’s resignation. Peyrefitte did so again following the shooting incident involving Belize City’s Deputy Mayor Micah Goodin. The UDP accused the police of giving Goodin preferential treatment. Peyrefitte claimed the incident was a joint enterprise for which Goodin should also be criminally charged. Williams refuted this claim, stating that Peyrefitte is misleading the public. Peyrefitte is alleging that Williams is simply trying to appease his political bosses. 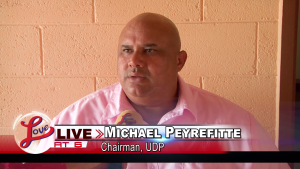 Michael Peyrefitte, UDP Chairman: “I stand by what I said and I maintain what I said and I don’t take it back. The problem that the Commissioner of Police has is that in my view he has no longer continued to be a police officer. I think he is more politician than Commissioner of Police and I think that if that is the case then he needs to resign from the Commissioner’s Office and go pursue the politics that we all know he wants to pursue. But for him to come and try and counteract what I said just to protect a person who he should charge and have arrested is a clear indication that he just wants to appease members of the People’s United Party, his party,  for which he wants to run.”

Police Commissioner Chester Williams responded to Peyrefitte via telephone today. He says that if Peyrefitte is so concerned about his future endeavours, Peyrefitte should offer him the leadership post of the UDP because they clearly need a leader.

Chester Williams, Commissioner of Police: “I’m trying to figure out what may have motivated the chairman of the UDP to make such a statement and the only thing I could think of is perhaps he is annoyed or aggrieved of the fact that I had responded to his comment about myself and the Police Department that he had made at two back to back press conference that they had and at the end of the day as the Commissioner of Police I will always stand in defense of the men and women of this department and I’m not going to allow nobody especially someone who knows the challenges and difficulties that are associated with being a police officer and it’s the fact that we do police in an ungrateful society and he knows this so for him to spew things about the department I must respond and so I could only think that it motivated him to say that because I responded to him. Be that as it may I am a police officer and if or when the time should come that I should decide to go into politics I certainly will step aside and do just that. For the time being my priority is to police this country and to offer the people of this country the highest level of policing that I can and that they deserve and if I should decide to run for politics I think that there is more vacancy in the UDP I think they need a leader so perhaps I can look at trying to become the new leader of the UDP so you can tell him that for me.”

Reporter: But you have considered running for politics ?

Chester Williams, Commissioner of Police: “I have not said I will run for politics. I said if and when I decide to do so I will leave this and go and do that. I don’t know yet what I will do when I leave. It is something I am still in the process of planning so I don’t know what he referred to as credible information or credible sources. Like I said perhaps they can recruit me to go and offer myself to be the leader of the UDP tell him I’ll consider that.”

Reported: But do you think you’ll be a better choice to be leader of the UDP?.

Chester Williams, Commissioner of Police:  “I’m just saying. He is saying I’m running for politics so I’m telling you to make him an offer for me.”