The opposition has threatened to take the Briceno administration for failing to provide them with a breakdown of how fifteen million dollars was spent. The money in question was used for the ground work into the Blue Bond loan. UDP Chairman, Michael Peyrefitte told Love News that enough time had passed for the government to submit the report, and nothing has been forthcoming.

Michael Peyrefitte, Senator: “It was in the appropriation bill number one or the supplementary bill which was the first supplementary financial bill for the administration since the reading of the budget March last year and I noticed in there that there was a $15 million amount that was set aside for the blue bond issue, for lawyers and advisors and I thought that that was a very hefty amount and specially since 95% of the work on that blue bond had already been done so I can’t see what would have justified, what kind of work would have justified $15 million. So I asked the vin and current minister of state for finance to explain to me who got paid out of that 15 million and I got no answer and the Belizean people are asking the opposition to get that answer. They want to know who were paid $15 million, which law firm and which advisors were paid $15 million. I would think that that is something that would be easy to retrieve. The Minister of Finance could simply write me a letter and say look these are the people we paid, this is how much we paid each person and so we could see who got paid and how much out of that $15 million that should be a public record there is no national security implication to that that’s a simple thing. So I wrote to the Prime Minister December 23rd. It landed on his desk in Belize city December 23rd. Under the Freedom of Information act it said that we had two weeks to respond to me or to give me the information and he didn’t do it so I wrote him again saying that under the same law if I don’t get a response by Friday then I will have to ask the ombudsman to intervene and if the ombudsman doesn’t want to intervene or if they don’t get an ombudsman by then – as I understand it the current ombudsman’s contract has expired so from what I understand there is technically no ombudsman – but if I have to go to the court then I will go to the court to get the answers to something that should be a simple thing I can’t understand what’s so complicated about providing information.”

Peyrefitte went on to tell Love News that the previous administration had already done most of the preparations into the Blue Bond which makes it impossible for them to imagine what the fifteen million dollars were used for.

Reporter: You say 95% of the work, the groundwork had already been done was that under the previous administration?

Michael Peyrefitte, Senator: “Of course and under the UDP and 95% is being very conservative, I want to say 99.999. All the Prime Minister had to do was to sign off on it that’s all he had to do. They had to do nothing much and certainly nothing that would justify $15 million.”

Reporter: Now ordinarily if it’s a clear cut or aboveboard transaction the opposition would not necessarily be asking for and breakdown or a report, is there any curious intel that the opposition has gotten in terms of who had gotten pavements out of that 15 million?

Michael Peyrefitte, Senator: “There is no curious intel. I as a senator I have been involved in two restructurings and I know exactly how much they cost and I know exactly how much the lawyers and the advisors would charge. From my experience we negotiated from months, had lawyers involved for months and advisors for months and the bill was nowhere close to $15 million. I want to know who was paid out of that $15 million and then I also want to know what did they do to earn $15 million. So it’s not a matter of certain intel it’s a matter of that is a hell of a lot of money for something that I know shouldn’t cost that much even for a lengthy negotiation. So the number is curious to me and when you put legal advisers and advisers and then you refuse to answer had the minister of state just answered me in the Senate I would have been satisfied with the information but to not give an answer and I write to the Prime Minister asking for an answer and not getting an answer now my interest is extra piqued as to what could they possibly be hiding that they don’t want the public to know but I will not give up on the issue, I will go to court if I have to. Which is completely unnecessary, just give the information.”

Just before six o’clock this evening our newsroom received a copy of the response letter from Prime Minister Briceno to Michael Peyrefitte. The 3-page letter was fiery and alluded that Peyrefitte was being mischievous as he is well aware of who the advisors were and who were paid. Prime Minister wrote, quote, “you know well, Mr Peyrefitte the identities of the lawyers and advisors who were paid to facilitate that process, because they are the very individuals and entities who worked on the process during the Barrow administration of which you were a part … What unease can you reasonably harbor about the competence and integrity of the legal and financial advisory team that negotiated the Superbond on the country’s behalf when every single firm my administration retained had previously been contracted by the UDP administration? Thus, unless you are feigning ignorance, you are well aware of these entities.” End of quote. With all that aside, what we can tell on the use of the fifteen million dollars is that for the Superbond there was a transaction cost for the buyout that amounted to just over ten million US dollars. Meanwhile transaction costs for the Blue Bond were just over four million US dollars. According to the Prime Minister, his administration had first allocated some six million US dollars earmarked for debt-restructuring costs. This was followed with some ten million US dollars set aside under a component of the Blue Bond financing. The release goes on to note that the recipients of payments include Citi Capital Markets, Hallmark Advisory, Sullivan and Cromwell, Orrick Herrington and Sutcliffe, David Polk and Wardwell, the Bank of New York Mellon, Carter Ledyard and Milburn, Eqip Global Restructuring and Global bondholder Services Corporation. 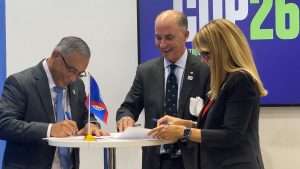 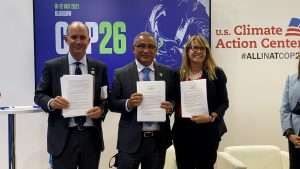 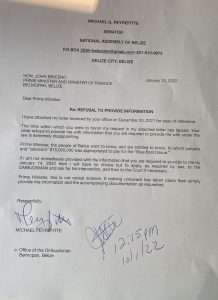