There is yet another internal dispute within the opposition and this time it involves former Punta Gorda Mayor Ashton McKenzie. Love News understands that the issue has to do with the post of caretaker for the United Democratic Party. In a Facebook post, McKenzie wrote “I have been a team player for both Patrick Faber and John Saldivar, and whenever I thought they were out of line or I couldn’t support their decision I told them upfront. But you see in Politics nobody likes independent thinkers. In his bid for Deputy Party Leader, I supported the Hon. Patrick Faber. In his bid for Party Leader, I supported John Saldivar twice. In the recall vote, I sided with John Saldivar and the Caucus for Change. One thing I can say about both given the experiences thus far that if they can’t control they try to eliminate you.” Those are strong words from a UDP member who has served time in office and who has been active in the party. Our newsroom spoke with UDP Chairman, Michael Peyrefitte on the issue. 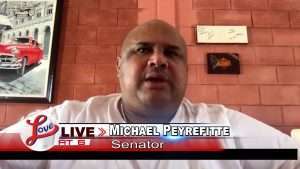 Michael Peyrefitte, Senator: “Our constitution is clear when you don’t have a caretaker the committee can select what we have termed an interim caretaker for the division. That doesn’t mean that that is the person who will be the permanent caretaker, it doesn’t even mean that that is the person who will be the standard bearer for the division just somebody put in place by the committee to look after the constituency on an interim basis until we can formalize elections for a permanent caretaker so to speak. Now in elections it is the ultimate zero sum game. Elections aren’t a draw, there are no participation prizes when it comes to elections you either win or you lose. The committee did not select Ashton, naturally he may be hurt, he may be disappointed in the result but it’s a result that he has to accept and I highly doubt and we have no evidence to indicate that those committee members used nothing more than their own discretion to choose who they wanted to be their interim caretaker. In politics you have choices you know and in politics people can lobby, people can try to influence, people can try to convince different people who to vote for that’s the game, that’s politics. So if I would like to see a particular caretaker get elected to run a division , to care for a division and I am a person who is entitled to lobby for a particular person that is perfectly fine in politics so I’m not saying that that is what Mr Saldivar did but even if he did, even if he lobbied for a particular person that is politics I mean isn’t that politics? That’s what we do, that’s what we do. When I ran in Port Loyola against Phillip Willoughby and John and Patrick came together to defeat me with Phillip Willoughby did I go home and cry? That’s politics.”

Our newsroom understands that McKenzie attempted to vie for the post of the party’s caretaker but was overlooked due to his close ties with Shyne Barrow. McKenzie believes that the new caretaker was handpicked by Saldivar and Faber and wrote that he is convinced that the Leadership of the UDP has its way of fixing things to suit their needs and their agenda. McKenzie added that he feels he is being victimized due to his relationship with Shyne Barrow who has openly announced his bid for the party leader of the UDP. Our newsroom reached out to McKenzie for comment however, he declined to comment on the issue and referred us to his Facebook post.