Another decision that the UDP is taking umbrage with is the decision by the Government to appoint former Deputy Prime Minister Florencio Marin, Sr. as a special consultant in the negotiations involving the northern sugarcane farmers and BSI/ASR. Party Chairman, Michael Peyrefitte says that not only is Marin not needed, but the political veteran also does not need the money he’s being paid.

Michael Peyrefitte, UDP Chairman: “Of course they will say he is needed. I disagree. I don’t think of all the people who can consult with the sugar industry the only one person we can draw for is Florencio Marin Sr. Listen I have great respect for someone who has been elected and represented the people of Corozal South East from probably before I was born, I have great respect for him but one I don’t think he needs thirty six thousand dollars, two I don’t think you can keep hiring people like that especially the father of two sitting government minister in the face of you telling public servants that they can’t get their increases back, you can’t institute a five dollar minimum wage. You cannot in that environment hire the father of two ministers to work in the sector. I remember when the Rt.Honorable Dean Barrow first became Prime Minister in 2008 and he believed he felt he needed the assistance of the Rt.Honorable Manuel Esquivel so he made the Rt.Honorable Manuel Esquivel a senior advisor to government with ministerial rank and Mr.Esquivel one dollar a year. It was just a peppercorn amount to say well he’s being hired in an official capacity but there is no need for him to make an additional salary just like I don’t think that there is a need for Mr.Marin to make an additional salary. Why can’t he in the goodness of his heart , with all his experience in the sugar industry just come and offer his services as a friend to the government and as a friend to the people of Belize free of cost. Why can’t he just do that ?

On Friday, Prime Minister John Briceno told Plus TV that he was the one who decided to bring Marin Senior on board. The Prime Minister says that Marin’s knowledge of the sugar industry will provide an advantage in resolving issues between the farmers and BSI/ASR. 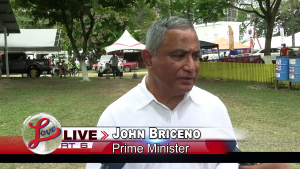 Hon. John Briceno, Prime Minister of Belize: “The hypocrisy of the UDP I mean they have no bounds. Again when Jules Vasquez’s father, the late Net Vasquez, was hired as executive chairman for BTL and was paid close to a quarter million dollars -imagine a quarter of a million dollars to be the executive chairman of BTL I did not hear Jules Vasquez criticizing it. I did not hear Michael Peyrefitte criticizing it. I did not hear anybody in the UDP criticizing it and he was in that position for probably nine, ten years ? So you could imagine the amount of monies that the late Net Vasquez collected and he was at about eighty five years old almost ninety years old ? We are investing thirty six thousand dollars for the entire year in paying Florencio Marin. We’re not paying him a quarter of a million dollars the way the UDP did to Nestor Vasquez who was about ninety years old. We are paying him three thousand dollars a month to a man who has dedicated his entire life to public service. To a man who has retired and has no need to come back and work but I asked him to come and to help us at this critical juncture where both the farmers and BSI are on the edge.”