UDP Shadow Minister and attorney-at-law Orson “OJ” Elrington was charged by police for a traffic incident that happened on Friday in Belize City. 44-year-old Sherlock Vernon was travelling on Princess Margaret Drive. It was when he got close to the ambulance ramp in front of Belize Elementary School, that he says Elrington collided with the left driver’s side of the Nissan Cube was driving. No one got hurt, but Elrington told us that he is preparing to go to court. 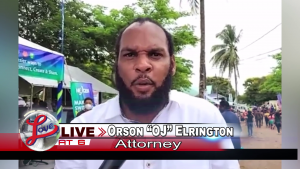 Orson “OJ” Elrington, Attorney: “At about eight thirty there about I was going to buy a burger at what we call HL’s stand. Pulling into the parking when a vehicle ran into my rear. I immediately thought that because I was almost at a standstill that the breaks of the vehicle failed and so I got out, examined the damages and spoke to the driver. I asked him ‘What happened.’ he said he thought I was going to stop – I mean he didn’t realize I was going to stop. I said how will you not realize I was going to stop when it has brake lights on it ? Anyway initially I said no problem, I won’t make a fuss of it just let insurance deal with it of which he admitted fault at that moment. I called the owner at that point Amado Badillo I have text messages, he said don’t worry about it I will deal with it tomorrow. However suddenly -I called the police then just out an abundance of caution to ensure that it is documented so that I don’t have any issues when it is time for insurance to pay and then the owner of the vehicle came and the police came and suddenly when the police came – when the owner initially came the driver of the vehicle got belligerent, disrespectful, rude, and suddenly started to deny fault. Thereafter the owner started in the same type of behavior and so the police afterwards they did their thing, they made their necessary measurements, they went through the process and that is it let the police take its course and we’ll have our day in court. It’s nothing but as you can see my handsome face is still unscratched. No problem whatsoever.”

Love News understands that when police checked Elrington’s vehicle, its insurance had expired almost two weeks before but the vehicle was licensed through to August. An acknowledgement form was read to him but he refused to sign. Elrington told us why he didn’t.

Orson “OJ” Elrington, Attorney: “Because they wanted to put in elements of the scene which did not exist. Why would I as an attorney accept something which did not exist at the scene ? That’s ludicrous. That’s stupid. Why would I ever do that. As I said we will have our day in court. I thought that how the matter could be settled amicably because I knew the owner of the vehicle but since this is the road that we want to go let the court take it’s course. I’m in the court every single day I have no problem being in court. In fact I like being in court.” 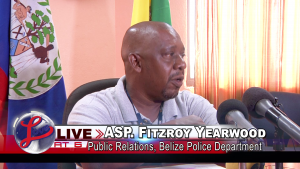 ASP Fitzroy Yearwood, Police Press Officer: “We all know that that crossing has no exception to anyone not even the police. We have to go around and you’re not allowed to make an U-turn there not even the fire service. That clearly is for ambulance only, the use of ambulance and there is a sign there that also indicates that and I don’t know – I heard on the news actually yesterday that he refused to sign his acknowledgment form, that’s your right. If you refuse to do that it’s your right but I know that our officers have already levied charges and he will have his day in court to answer to them and defend himself against those.”

He is slated to go to the Magistrate Court on June 3.