The UDP is not backing down from its demands from the Government to explain how it is spending public money. In this case, the party is insisting that the Briceno administration disclose how much money it has paid law firm Courtenay Coye LLP for legal services. More than that, given that the principals in the company are Minister Eamon Courtenay and Minister of State Christopher Coye, the UDP wants to see proof that the firm has gotten special permission from the Governor-General Dame Froyla Tzalam to do business with the government. An official response to PM Briceno has not been forthcoming and so the party’s chairman, Senator Michael Peyrefitte has now taken steps to write Dame Froyla herself asking for disclosure under the Freedom of Information Act. Today, the media asked Senator Peyrefitte: “why the rush?” Here’s how he explained why this information is important. 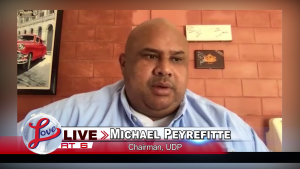 Michael Peyrefitte, Chairman, UDP: “I can’t imagine how difficult it can be to provide. We have gotten it already you know but unofficially. I want it officially so if we can get it within a day or two of me asking then how come they cannot provide it officially ? We want an official response to the letter that we wrote and unless it comes from the Prime Minister I can’t take it as official but we were given access to certain information right away by people who were as offended as we were about the amount and the type of work that they were doing so we have our insiders but at the same time we want an official response from the Prime Minister and it’s not too difficult to collate that, that should be very easy to do. And secondly I asked the Prime Minister on May 30 for the letter in which he said that Courtenay Coye had been given a special dispensation by the Governor General that should be an easy thing to provide. Take a picture of it and send it to my phone by text I mean it’s an easy thing to provide. What can be so difficult to provide ? I mean about that letter, what can be so difficult to provide about it so I just think that they genuinely feel like – and this would be the worse of the two scenarios – either they don’t have the letter and the Governor General whether Sir Colville or Dame Froyla Tzalam either they did not give the special dispensation as the Prime Minister has said or they just feel like they don’t have to give it because then they don’t have to they’re in government and screw you we give you when we want if we want because I mean you know what am I going to do ? Lash them ? That’s what they’re thinking in their mind.”

But the question remains: how much has the law firm been paid? The UDP claims it has seen a figure of just under a million dollars but Peyrefitte is hoping for an official response to confirm whether or not the figure is factual.

Michael Peyrefitte, Chairman, UDP: “I want to be doubly sure that that is the case and not only that I want to see if the Prime Minister will lie if you want me to be completely honest with you. I want to see if he will lie or I want to see if it at least he will be honest and say ‘Yes this is how much we have paid these people for these services that they have provided to the government.’ This is what we want to know and we want to know if the figures match up and we want an official response from the Prime Minister and if we release the information without compelling the Prime Minister to do it as he is required to do under the law then we are letting him off the hook, we are telling him he doesn’t have to do his job. We’re telling him he doesn’t have to provide it. We have to operate as an opposition by leaks ? That’s not what we want to do Prime Minister. You said you have nothing to hide, the gentlemen have said they have nothing to hide so just provide the information. Just provide it.”

As for the letter to the GG, the UDP chairman explained that he’s ensuring the party’s ducks are in a row, if the matter has to go to the court.

Michael Peyrefitte, Chairman, UDP: “If and when the matter has to go to court I want to make sure that I can demonstrate to the court that I exhausted all avenues. I asked the Prime Minister for the letters of permission that he said were given to Ministers Courtenay and Coyi he has not responded to me so now I’m going to the Governor General because it should be in the Office of the Governor General that letter if the current Governor General or the previous one granted permission to any minister to have their firm or company engage in business with the government then that should be a matter of record and the letter should be there. So I’m just exhausting all avenues so that if when we go to court we can present to the court and say we tried, we tried every possible angle to get this information out and they just refuse to give us. You see this is the next thing too you know. He says that we like to come and sue every minute and so for little petty reasons, well if you give us the information we won’t sue but if you insist on not providing it then how else can we compel you to provide what you need to provide and should provide unless we get a court to compel you because it seems like that’s the only way he would do it.”

Senator Peyrefitte went on to say that if such a letter permitting the business relationship between GOB and Courtenay Coye does not exist, both Senator-Ministers should resign immediately.