It has been a long, tedious process but it seems that the Integrity Commission will soon begin its work after the Briceno administration finally appointed a chairperson. She is attorney-at-law, Andrea McSweaney-McKoy and on Friday, the motion for her appointment was presented to the Senate. When asked about the appointment, Senator Michael Peyrefitte explained that he hopes that this commission will be fair and honest in their work. 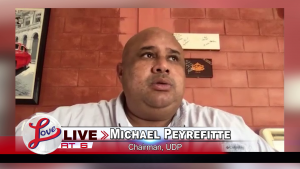 Michael Peyrefitte, Chairman, UDP: “The people that the PUP have selected we don’t have an issue with those people either. We believe that there is no reason to object to them and I’ve always said it doesn’t matter who the members of the Integrity Commission are, if they are fair then I have no issue with it especially since I have nothing to hide so it doesn’t really matter who the person is are but I don’t see that Miss McSweeney as the new chair will be a difficult person to deal with because I know her personally. I think she’s a solid attorney and a solid individual, and I expect her to do her job. Mr. Swift, George Swift, a total veteran accountant and finance person these are the people you want to encourage to hold those positions. So even though they were selected by the PUP I don’t have an issue with them.”

Senator Peyrefitte was also asked about the hesitancy about being asked to join the Commission and to make submissions. He said that while people may be worried about the government prying into their business, he expects the work will be meaningful and an important part of democratic values.

Michael Peyrefitte, Chairman, UDP: “Well, we always expect it to be meaningful and fruitful. And again the PUP when they were in opposition hey had all the answers. They said they would fix the world, they would fix everything so we fully expect them to do exactly what they said should have been done to the Integrity Commission in the past. It’s not easy. Because then when you accept to be a member of the Integrity Commission you yourself have to go through a level of scrutiny into your personal life and your belongings and your assets and your liabilities and all of that. It’s not an easy thing. People don’t appreciate an invasion into their privacy so easily, so they almost be congratulated those who are willing to accept the offer to serve the country, and let’s see what they do. Let’s see how they perform. Every person on that list that was selected I am prepared to give them a fair shot to see how they will perform.”

Senator Peyrefitte also added that more people should be added to the list of those who are scrutinized by this commission. This list, he says, should include senior public officers.

Michael Peyrefitte, Chairman, UDP: “Well, because if you claim to hold public office and you claim to serve the people, I think that you need to be prepared for the people to see your assets and how they have grown or not grown while you’ve been in public service. And it’s not new to me I’ve been doing this since 2012, so ten years I’ve been filing and there’s never been an issue with my declarations because I’m always honest on my declarations and they can always come and check me if they want so I’m not worried about it at all. I think it should be extended. I think the list is too small for those people who are subjected to Integrity Commission filings. I think it should be extended to all senior public officers and public servants for example because we all know in the past you see heads of departments living lifestyles that they shouldn’t be living based on their salary. So I think the problem is that it only stops with the politicians. It should be the entire public service. I think anybody who works in the public service should be subjected to it. So I don’t support less of it. I support more of it. And like I said, I could talk loud because I have nothing to hide.”