Negotiations between Ukraine and Russia are expected to continue on Tuesday for the fifth round of talks. Meanwhile, the US is warning China not to help Russia whose president, Vladimir Putin has reportedly requested military aid from China. And as Russia’s invasion continues for another night, there’s the hope that the people of Ukraine will continue to fight, and fight to successfully defend their country’s sovereignty. Ukraine is seeking more help from Western countries to beat the Russian invasion. The invasion has a migration crisis with two and a half million refugees feeling the war. On Friday, Guatemala received its first arrivals of Ukrainian families. The eight Ukrainians arrived in Guatemala “for humanitarian reasons”. More Ukrainians arrived in Guatemala a few hours later. It is unclear how many may have arrived privately in Guatemala since the Russian attacks on Ukraine began. Guatemala’s announcement was the first on Ukrainian arrivals from the Central American countries known as the Northern Triangle – also including Honduras and El Salvador – which have themselves seen much of their populations emigrate due to violence and poverty. A rising number of Ukrainians and Russians have fled to Latin America in recent months, including those who turn up at the United States-Mexico border. 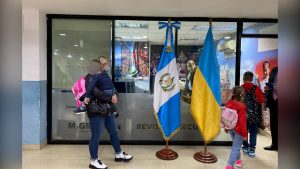