Fifty-eight-year-old Edwin Hill: he’s the Prime Minister’s driver and tonight he is at the centre of an investigation of a traffic incident where a man lost his life. Sometime after 7 o’clock last night, Hill was heading home to Orange Walk Town when he hit a cyclist on the Phillip Goldson Highway. Reporter Vejea Alvarez tells us more.

Vejea Alvarez, Love FM News: Tonight, the Prime Minister’s driver, 58 year old Edwin Hill, is on the wrong side of the law and facing criminal charges. That’s because Hill knocked down an unidentified man on the Philip Goldson highway. It happened around 7:00 last night. The victim, only described as a dark complexion male with dreadlocks, was on his bicycle when he was knocked down. He died while receiving treatment at the KHMH. Commissioner of Police Chester Williams told reporters that the victim swerved into Hill’s lane. 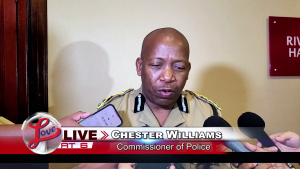 Chester Williams, Commissioner of Police: “Mr. Edwin Hill was driving his private motor vehicle from the direction of Belize City to Orange Walk Town when reaching between mile 24 and 25 on the Philip Goldson Highway, he knocked down a cyclist who was riding in front of him and the cyclist swerved in the path of his oncoming vehicle.”

Vejea Alvarez, Love FM News: Compol Williams says that Hill made efforts to avoid the cyclist but due to oncoming traffic the incident was unavoidable.

Chester Williams, Commissioner of Police: “Due to the fact that other vehicles were coming in the opposite direction, he attempted to swerve away but could not have successfully done so due to the oncoming of traffic. The cyclist was hit and was transported to the Karl Heusner Memorial Hospital where he later succumbed to his injuries.”

Vejea Alvarez, Love FM News: Hill was later taken to the Ladyville Police Station where he gave a report and has been cooperating with investigators. Police are now putting together the file and will be sending it to the Director of Public Prosecutions, Sherilyn Vidal who will review the case and determine what criminal charges will be laid against Hill.

Chester Williams, Commissioner of Police: “Based on what investigations are showing so far s that the cyclist is the one who swerved in the path of Mr. Hill’s oncoming vehicle. But, we’re not going to say at this time who is at fault. We’ll put the file together and then we send it to the D.P.P. and then she will make that determination.”

Vejea Alvarez, Love FM News: While the DPP is yet to determine what charges Hill will face, many in the public believe that due to his position, Hill will not face any serious repercussions. However, the Com. Pol. stated that there is no sacred cow in this investigation as Hill would be treated as any civilian would be.

Chester Williams, Commissioner of Police: “These types of cases, we would normally not arrest somebody right away unless there is clear indication that the driver is at fault or in situations where drivers would have refused to cooperate by giving breath or urine samples to test if they were under the influence. But we normally just give an N.I.P. and we send the driver home until the investigation is over then it goes to the DPP and then the determination is made there. Yes there will be those who would want to say oh dah because oh dah di Prime Minister’s driver but I would want to invite them to just look at the history. Look to see how we have dealt with situations like this in the past and they will see that there is no special treatments given to Mr. Hill given the fact that he is the Prime Minister’s driver.”