The concern about unsustainable logging practices in Belize continues to be expressed, particularly in the Toledo district. A recent incident was made public by Conservationist, Wil Maheia, who took to Facebook to point out the alarming extraction of trees from the forests. He added that there are also no replanting strategies put in place to replenish the trees that have been cut down. Our newsroom spoke with Maheia via zoom who expressed other growing concerns about how this affects the community. 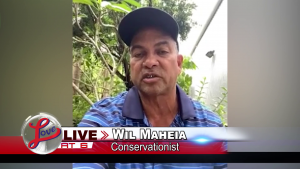 Will Maheia, Conservationist: “I am not against logging. I am against unsustainable logging. I think that we can benefit from logging in the Toledo district. Jobs could be created. This could be a very meaningful industry for people in Toledo. The law is there. The rule of the law is that if it rains then there should be no movement of logs but on Sunday night it rained in Punta Gorda, in the Toledo district and on Monday trucks were leaving with logs. That should not have happened because they have just destroyed what the Hon. Julius Espat and his team had done. Again, we talk about environmental justice. There are kids in Boom Creek community who have such a difficult time to go to school because the road is in such bad condition. If there’s a medical emergency, I heard this from the health worker himself, that they don’t even want to do a charter because the road is so bad. If there is a medical emergency, you can’t even get the sick out. If somebody is having a baby, they can’t even get to the hospital because the road is in terrible condition.”

In Belize, the logging season runs from October 15 to June 15 and during the closed season, any logging is strictly prohibited to protect forest soil and reduce damage to public roads during the rainy season.