Members of the public are outraged after a cell phone video showing two women in a physical altercation went viral on Facebook. These two women are believed to be the same that were videoed fighting at the Belize City bus terminal this past weekend. Suffering from a mental health condition, one of the women is seen attacking the other on Orange Street in downtown Belize City. But the public’s outrage isn’t directed at the aggressor. It is directed at several persons who did nothing but video the fight and those who walked by without a care in the world. There is an outrage because as we saw last week, Estevan Baeza who was brutally attacked by BDF soldier Raheem Williams in public in Orange Walk Town died from the injuries. That attack was also caught on camera and like this recent incident, no one died anything to stop the soldier. While a police officer did manage to part the feuding women, President of the National Trade Union Congress of Belize, Luis Luke Martinez, says
Luis Luke Martinez, President, NTUCB: “What this country is going through is devastating and we’re in a state of lawlessness. The amount of things that run through, that goes through the mind of any thinking Belizean is beyond nerve-racking. I can’t explain how I feel about it. It’s too emotional for me to explain how I feel about it. It racks every single part of your nerves, Hipolito, to know that we are in a state of lawlessness. The public beating that that elderly woman took this morning is, it’s outrageous.” 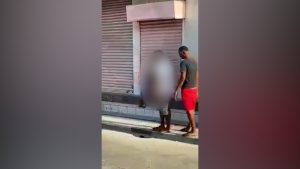 Reporter: Does it upset you that in the video, you see people just walking by as if nothing is happening and not only that but, you hear persons in the background saying, I think, “kill her” or something to that effect?

Luis Luke Martinez, President, NTUCB: “Yeah, I mean everything about that event, everything about that event warrants significant concern and of course, it warrants the immediate attention of the authorities that are responsible to address these situations. But I am very confident that the groups who are supposed to ensure that these things don’t happen will look into it and they will address that very serious situation. Hipolito, if somebody is beating me up out there, I don’t want you to hold a camera and video it. If somebody is beating you up out there Hipolito, I wouldn’t hold my camera to video somebody beating you. Maybe I would hold my camera to stone the person to try and get him off of you, right? So the awareness, we have to bring out the awareness and let people be aware of the advantages of these devices and the different platforms. It can’t be that the only use that we have for these devices and platforms, we can’t be using it that way, mien, and then passersby just, I mean nobody is concerned. It’s tough to watch.”
Martinez hopes that the Ministry of Human Development would act accordingly to address the matter.