The legendary Queen of Calypso is back with a new studio album. 82-year-old Calypso Rose is planning to release her album on August 26. She released her first single, a version of Andy Palacio’s “Watina”. Stonetree Studios Owner and record producer Ivan Duran worked on the album and shares why this album is special. Hipolito Novelo reports.

Hipolito Novelo, Love FM News: The queen of calypso performing late Andy Palacio’s ‘Watina.’ The video was shot in Hopkins before the pandemic. Calypso Rose’s version is the first single of her new album “Forever” due in August 26th and produced by Stonetree Record founder Ivan Duran. 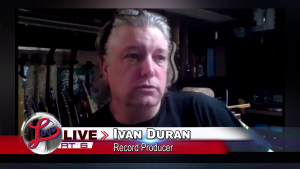 Ivan Duran, Record Producer: “She showed me a tape that she had home of a cassette that Andy had dedicated to her and I just threw out the idea to her about doing a version of Watina. She hadn’t heard the album. She hadn’t heard the song. She was more familiar with early days of Andy’s Punta Rock releases and I proposed to her, “How about if we do a new version of that song with new lyrics, written but also based on the original story line of Watina?”

Hipolito Novelo, Love FM News: And that was done. Filmed in beautiful Hopkins, the video prepared today shows the lovely Calypso Rose with members of The Garifuna Collective. This new version of Watina features stellar riffs from guitar legend Carlos Santana but as producer, Duran had to be very careful. After all, the original was a masterpiece.

Ivan Duran, Record Producer: “It’s very delicate, especially when you have a song that’s so iconic and it means a lot to, not only to us, but to a lot of people and I was a bit hesitant at first because there’s many ways to mess it up, right, when you do something like that. But the more I talked to it, about it with the band, with the Garifuna Collective, everybody thought it was a cool idea and also, a lot of time had passed already since Andy’s passing, since the release of Watina and we thought, why not? Let’s do a new version and actually a very different version.”

Hipolito Novelo, Love FM News: And while this version doesn’t sound much like the original, Duran explained that the original chorus had to be kept.

Ivan Duran, Record Producer: “The main thing of Watina, to me, apart from the whole spirit of the performance and Andy’s, you know, baritone, beautiful, mellow voice is the actual chorus which is the one thing that you remember in that song and funny enough, the chorus on this new version is exactly the same from the original. We actually took a sample from it and you can even hear Andy, Andy Palacio on the background as part of the group singing the chorus.”

Hipolito Novelo, Love FM News: And we are yet to see whether the public will sing along or click stop.

Ivan Duran, Record Producer: “I expect some people to hate it, honestly. I mean, I would probably, as a listener I would have hated it. I just happen to also be the producer and I went through my process and my suffering myself but when you have a song like that, like I said, you’re going to have a lot of people not get it. Like why? Why do it? I mean, especially when the original one is perfect but I also believe that doing new stuff and doing, making changes to something is, also that’s healthy, right? For all of us, we can’t just be stuck in one thing. And also I think that Rose has the ability to influence a whole new generation of listeners. I think like some people will discover this new sound, this new song and might want to listen to the original one.”